The Ford Explorer EcoBoost is a four door sport utility vehicle with seating for up to seven passengers thanks to the available PowerFold third row seating that is able to fold flat with just the touch of a button.  The front wheel drive EcoBoost gets its name from the next generation turbocharged and direct injected 2.0 Liter four cylinder that generates a maximum of 240 HP and 270 lb-ft of torque when the turbos are spooled up, and returns an estimated 20 MPG around town and 28 MPG at speed; which is only a bit less powerful than the traditional naturally aspirated V6, but much more fuel efficient, making the Ford Explorer EcoBoost the best in class, for non-hybrid three row, large utility vehicles.  Which is partly responsible for the Ford Explorer being named North American Truck of the Year.

While Ford offers the Explorer with V6 power standard, the highly efficient EcoBoost power plant is available on all trim levels.  The base Explorer starts out at $28,280 and comes equipped with safety innovations like inflatable rear seat belts and creature comforts like an AM/FM/CD stereo riding on a set of bold 17 inch five spoke rollers.  The Explorer XLT is a bit better equipped at $32,095 and comes from the factory with Sirius XM Satellite Radio, SecuriCode keyless entry and shiny black mirrors covers with integrated turn signals packed with LED indicators as well as approach lamps that light up when owners move closer to their cars in dark environments.  The XLT rides on a set of 18 inch painted wheels and polished 20 inch rims as an option.  The top of the line Explorer Limited gets SYNC with MyFord Touch, leather upholstery and a push button starter as well as a set of painted 20s standard, and polished rims available as an option.

A list of cars similar to the Explorer EcoBoost includes the 2012 Toyota Highlander, 2012 Chevrolet Traverse and 2012 Dodge Durango. 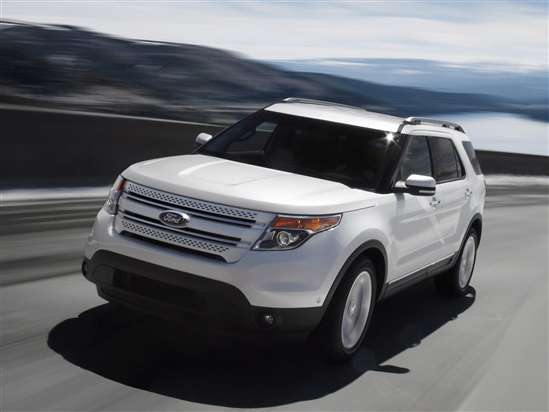