Luxurious, full-size SUVs like the 2016 Ford Expedition Platinum are like modern-day land yachts, with more room, more premium amenities, and more power than mere mainstream crossovers. And, at the time of this road test and review, it’s been especially smooth sailing for the Blue Oval entry. Sales of the Expedition have jumped significantly during the first half of the year, thanks in part to the launch of Ford’s latest in-vehicle communications and entertainment technology. The 3-row SUV also leverages Ford’s sophisticated EcoBoost engine technology under the hood. That said, the Expedition matches those leading-edge benefits with the traditional advantages of a body-on-frame sport utility, including a robust towing maximum, massive amounts of interior space and a 4-wheel-drive system with a dedicated low gear for leaving the road.

Precious metals can be expensive, and the 2016 Ford Expedition Platinum is priced from $60,335. It’s a jump of 15K over the standard Expedition, but that MSRP has to be put in perspective, too, since it’s lower than for comparable range-topping models from Chevrolet, GMC and Toyota. It’s further worth pointing out that the most-expensive Ford Expedition is some $2,500 less expensive than a base Lincoln Navigator.

Also, just to be clear, the Expedition Platinum sets the gold standard for Ford SUV luxury at that MSRP, complete with perforated-leather front seating with multi-stage heating/cooling functionality. There’s heat for second-row, outboard passengers as well, and all of Ford’s top infotainment technologies also are standard.

The 2016 Ford Expedition Platinum may not ride on the newest platform in the segment, but its powerplant is impressively advanced. It’s the Blue Oval’s popular 3.5-liter EcoBoost V6 that’s backed by twin turbocharging, direct injection, 365 horsepower and a best-in-class 420 lb.-ft. of torque. That output furnishes 9,200 lbs. of pulling power and major competitive advantages. For instance, the Expedition has a 600-lb. towing advantage over the Chevy Tahoe, along with a stiff 1,800-lb. lead compared to the Toyota Sequoia. The EcoBoost difference is that the Ford additionally equals the Chevy for city and combined fuel economy, while its standard EPA line of 16/22/18 tops the Toyota by 3 MPG/3 MPG/4 MPG.

With a length of 206 inches, the 2016 Ford Expedition Platinum is just a tad longer than its direct SUV competition, and to provide a comparison with 3-row crossovers, the 2016 Ford Explorer comes in at 198.3. Ford designers, meanwhile, focused most of their efforts on the Expedition’s face, which shows off a satin-aluminum 3-bar grille with chrome inner accents and horizontally oriented LED fog lights.

However, the most striking standard style cue for the Expedition Platinum may be its polished aluminum wheels. These bold 20-inchers have six thick, multi-dimensional spokes that really accentuate the vehicle’s many chrome details. Among them: chrome exhaust, chrome door handles, chrome side rails, and chromed power-folding and heated exterior mirrors.

Shoppers coming to this section of our 2016 Ford Expedition Platinum review will no doubt want to make sure this premium entry still makes the grade for versatility, so here are the highlights. The Expedition has 108.3 cubic feet of total cargo space, and more in all seat configurations than the Chevy Tahoe, and in the cabin, it has more second- and third-row headroom and legroom. Seven colors of ambient lighting, a choice between two shades of supple leather, and a distinctively designed dashboard — sectioned into discrete, rectangular zones — are all standard as well, as is a power moonroof.

Also powered as a standard interior feature is the third-row seating, which folds at a touch of a button for added cargo capacity.

Much as in the powertrain part of our 2016 Ford Expedition Platinum review, here the focus is on the Blue Oval’s successful efforts to freshen up the technology in its SUV. For example, the Expedition Platinum gets the newest SYNC 3 setup, with navigation, as standard equipment. The system has been thoroughly upgraded with a new capacitive touchscreen, enhanced voice-recognition capability, and faster processing speeds, and the nav feature now makes destination entry easier than ever.

Of course, SYNC also controls the Expedition Platinum’s premium audio system, which is from Sony and furnishes 390 watts of power and 12 speaker, including a subwoofer that’s located aft of the second-row seats for surging bass performance.

SiriusXM Traffic and Travel Link, along with HD Radio, are standard as well.

The 2016 Ford Expedition Platinum is undoubtedly well equipped right out of the box, yet there are a variety of premium options to explore. For more style, customers can upsize to massive 22-inch polished aluminum wheels and swap the standard second-row bench for flip-fold bucket seats. Rear-row passengers also can enjoy another tech benefit that’s particularly welcome on long trips: an INVISION dual-screen entertainment system with two independent, 7-inch displays mounted in the back of the front-seat headrests.

Finally, for a smooth, more confident ride in just about any driving scenario, owners can order the Expedition Platinum with a continuously controlled damping suspension. With three different settings, this technology monitors data from the Expedition’s suspension, steering and braking systems, then adjusts suspension damping for optimum on-road control.

The 2016 Ford Expedition Platinum stands out from the rest of its rivals as the only one with a 5-Star Overall Safety Score from NHTSA, and that’s with a 3-star rating in the rollover test, although adding 4-wheel drive does add another star. There’s also a fair amount of standard driver-assistance technology, including Ford’s Blind Spot Information System, a rearview camera and a reverse-sensing system. Yet the Blue Oval has some unique features here, too.

The standard Ford MyKey technology sets limits to certain vehicle systems for younger drivers, and the SOS Post-Crash Alert System makes it easier for first responders to locate the vehicle and help in the event of an accident by activating the horn and flashers, and unlocking the doors.

The big news for this portion of our 2016 Ford Expedition Platinum review is the existence of the extended-length edition. The Blue Oval actually has EL versions for all Expedition trims, delivering noticeably more cargo space for customers who need it. The standard Expedition, remember, has up to 18.6 cubic feet of cargo room behind the third row, 55 behind the second and 108.3 in total. In the Expedition EL, those ratings expand to 42.6 cubic feet/85.5 cubic feet/130.8 cubic feet.

Perhaps more important is that this gives the Ford a further competitive edge, since brands like Toyota don’t offer extended-wheelbase 3-row SUVs, and the Chevy competitor doesn’t offer as much space.

The Blue Oval brand certainly has seen some notable momentum for the Expedition lineup during the first half of the current selling season. Yet our 2016 Ford Expedition Platinum review covers just some of the reasons behind that, from its lavish luxury and surprising value to its Ford-only technologies like an EcoBoost engine and SYNC 3 infotainment. As a result, customers on a shopping safari for a fullsize, three-row SUV — with real body-on-frame capability — should be sure to consider a well-stocked Expedition. 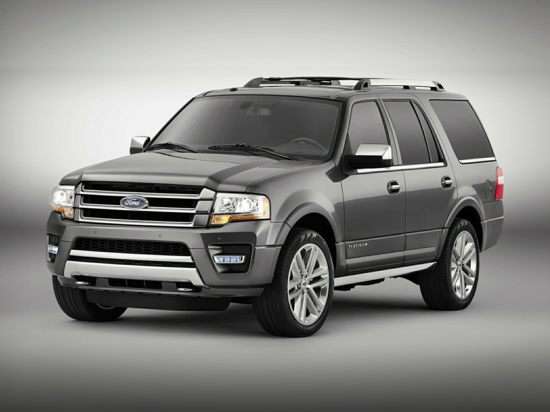