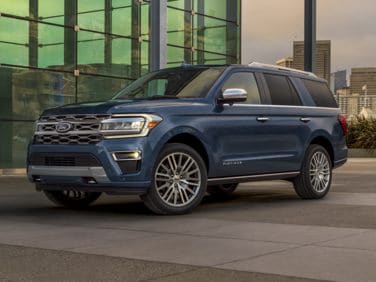 All About Ford Expedition

The 2008 Expedition carries over from the re-design that occurred in 2007. The SUV was given a new platform, the T1, which is related to but not exactly the same as that which is now found underneath the skin of the 2008 F-150. This upgrade has meant some improvements for the Expedition, most notably an increase in rigidity and an independent rear suspension which greatly improves handling and ride comfort. Another change is the addition of the EL version of the SUV, which lengthens the truck to better compete with the long-wheelbase versions of the Suburban. The EL versions of the truck come standard with third-row seating, increasing passenger capacity to seven.

The Expedition has 4 trim levels – 8 if the EL versions of the truck are counted. The XLT is the base model, and it comes equipped with standard cloth seats, front and rear air conditioning (needed in a vehicle this size), 17-inch wheels and heated exterior mirrors. The Eddie Bauer improves on some of the interior appointments and also provides an exterior appearance package to differentiate it from the regular Expedition. The Limited trim is usually positioned as the top of the line when it comes to Ford vehicles, and the Expedition Limited come with a plethora of features such as heated and cooled front seats, 18-inch wheels, and power adjustable pedals. However, at this size Ford offers an extra layer of decadence for the well-heeled buyer, and the King Ranch Expedition lets the driver revel in a sea of high-quality Chaparral leather seats and wood paneling, also adding a reverse sensor and special engraved King Ranch wheels.

All versions of the Expedition can be had with either standard rear-wheel drive or four-wheel drive. The only engine choice is a 5.4 liter V8 which makes 300 horsepower and 365 ft-lbs of torque. Combined with a 6-speed automatic transmission and a lengthy wheelbase, this enables the Expedition to tow 6000 lbs – upgraded to 9000 lbs if the heavy-duty trailer towing package is ordered.****** The interior of the Expedition is roomy and comfortable – with all of that size, how could it not be? In addition to the space afforded passengers and cargo, the modern chassis and suspension of the Expedition places its driving dynamics above those of its General Motors competition. While the vehicle might belie its truck roots through ponderous acceleration, it does have a more controllable feel than some of the other large sport utility vehicles that it is in competition with. The Expedition is an undisguised, but improved truck-like SUV in a class of vehicle where that is worn like a badge of honor.

The 2009 Ford Expedition is a carryover from 2008. There are a wide range of trims available for this full size SUV – the Expedition is available in XLT, Eddie Bauer, Limited and King Ranch editions. Each of these trims is additionally offered as an EL model, which signifies an extended wheelbase. All versions of the Expedition make use of the same 5.4 liter V8 engine that produces 310 horsepower and 365 lb-ft of torque, an improvement over the previous year thanks to the addition of 3 valves per cylinder. The V8 also now offers standard Flex Fuel compatibility for use with E85 ethanol fuel. A 6-speed manual transmission is the only transmission option, and 4-wheel drive is available across all models.