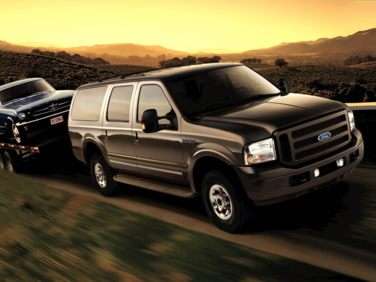 All About Ford Excursion

There was a time when it seemed as though sport-utility vehicles would continue to grow in size completely unchecked by either fuel economy or practicality. Automakers were churning out ever larger vehicles designed to accommodate greater numbers of passengers and their accompanying cargo. The Ford Excursion rolled onto the scene in 2000. Built on the same platform as the Super Duty pickup trucks, the Excursion’s heavy chassis was ideally suited for towing and hauling excessive amounts of whatever could be thrown at it.

The 2005 Ford Excursion has a road presence that is best described as intimidating. With strong, upright features and a front end that has more in common with a small bus than a passenger vehicle, the Excursion cuts a strong profile when compared against some of the softer-looking sport-utility vehicles on the market. There are four trim levels available for the Excursion, and each has a range of engine options. A 5.4 liter V8 that generates 255 horsepower can be had in each, while an enormous 6.8 liter V10 motor is standard in the upscale Eddie Bauer and Limited versions of the Excursion when equipped with four-wheel drive. This same mill, which makes 310 horsepower and a whopping 425 lb-ft of torque is optional on entry level trims. A 4-speed automatic transmission handles the shifting duties in each vehicle. For those who intended to perform serious towing, a 6.0 liter, 325 horsepower diesel V8 engine is also available, mated to a 5-speed automatic.

With 11,000 lbs of capacity and a long, stable wheelbase the Ford Excursion is a tower’s dream platform. The diesel engine’s 525 lb-ft of torque make it a popular option for serious hauling, and at 18 miles per gallon, it won’t necessarily break the bank on long trips. Buyer’s who opt instead for the gasoline-powered V10 may find themselves on the short end of the power and fuel economy stick. At over 7,000 lbs, the Excursion’s relatively weak V8 engine is ill-suited to more than puttering around town.

Inside the truck, the promise of the vehicle’s exterior dimensions do not disappoint when it comes to interior space. Three rows of seating can accommodate up to nine people in total, depending on how the passenger compartment is configured, and for once even the rear-most seats do not feel too tight or awkward. With the third row removed, the Excursion offers more than 100 cubic feet of internal cargo space, and with the second row of seating out of the picture interior storage dimensions blossom to those of a full-size pickup truck bed. Passengers will be kept happy with second-row audio controls, and the driver is treated to a well-laid out dashboard, but while the interior of the truck is comfortable, it could not be called luxurious.

The Ford Excursion was the largest SUV ever produced by the company, but soaring fuel prices and a general backlash against the conspicuous consumption of this class of vehicle led to the Excursion being canceled in 2005. In its place an extended version of the Ford Expedition was pressed into service.