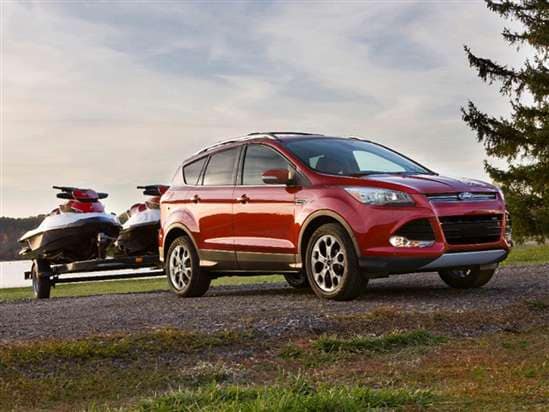 This year, Ford discontinues the SEL trim level, leaving Escape S, SE and Titanium models. Also, the hands-free power liftgate system is offered on versions that are simultaneously equipped with the towing package.

Options include a navigation system, a panoramic sunroof, and numerous technology upgrades.

According to the National Highway Traffic Safety Administration (NHTSA), the 2014 Escape gets a 4-star overall crash-test rating. The Insurance Institute for Highway Safety (IIHS) has not officially rated the 2013 Escape as this summary is written. Last year, the Escape received a “Good” rating in all assessments except for the new small overlap frontal-impact test, for which the SUV received the lowest possible score of “Poor.”

Ford equips every 2014 Escape with a reversing camera, Sync connectivity with 911 Assist, and programmable MyKey features. If the Escape’s airbags deploy while a smartphone is both paired to Sync and aboard the SUV, 911 Assist automatically dials for emergency rescue assistance. MyKey allows the Escape’s owner to program vehicle speed and stereo volume limits, incessant seat belt warnings, to eliminate the ability to shut off the stability control system, and more.

Additional technology highlights include a MyFord Touch infotainment system, a blind spot information system, front and rear parking assist sensors, a rear cross traffic alert system, a hands-free rear liftgate operated by waving a foot under the bumper, and an Active Park Assist system that steers the Escape into a parallel parking space while the driver operates the pedals and transmission.