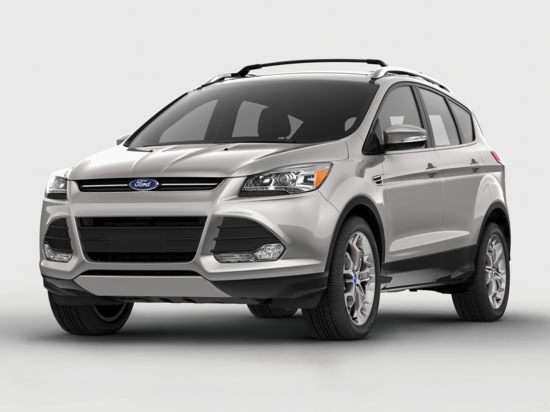 A 168-horsepower, 2.5-liter 4-cylinder engine is standard for the Escape S, driving the front wheels through a standard 6-speed automatic transmission.

The Escape SE and SEL are equipped with a turbocharged, 178-horsepower, 1.6-liter EcoBoost 4-cylinder and a 6-speed automatic. Ford’s new Intelligent 4WD system is optional on these two models.

The Escape Titanium has a turbocharged, 240-horsepower, 2.0-liter EcoBoost 4-cylinder engine and a 6-speed automatic. Intelligent 4WD is optional, and this engine can be installed in the SE and SEL models as an option.

The 2013 Escape receives an overall rating of 4 stars in crash tests conducted by the NHTSA, and is called a “Top Safety Pick” by the Insurance Institute for Highway Safety.

MyKey is standard for the 2013 Escape, allowing the SUV’s owner to program specific vehicle features including speed alerts, maximum stereo volume, seat belt reminders, and more. Additionally, the Escape offers a foot-activated power liftgate, a MyFord Touch infotainment system with navigation, and HD Radio with iTunes tagging capability. A reversing camera, front and rear parking assist sensors, and rain-sensing wipers are available, along with a Blind Spot Information and Cross-Traffic Alert system. Active Park Assist steers the Escape into a parallel parking space while the driver operates the transmission and pedals.