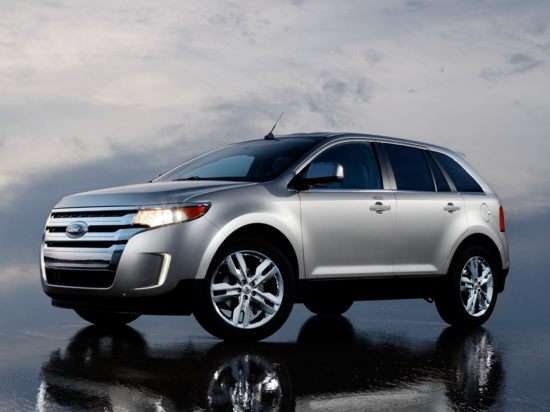 The 2013 Ford Edge gets a bit sharper for the new selling season, courtesy of a new appearance package on SEL models. It injects further style into the popular crossover with premium seating that combines an exclusive Charcoal Black leather trim with gray Alcrantra suede inserts; also in the mix here are 20-inch aluminum wheels with a machined finish and black-painted pockets, restyled headlamp and taillamp designs, a body-color front grille, and logoed floor mats.

The 2013 Ford Edge SEL then delivers a notable increase in premium features and appointments, with an exterior that’s enhanced with body-color accents and 18-inch wheels, along with a cockpit that welcomes a voice-controlled SYNC system, a reverse-sensing system, and a dual-zone climate system with air filter, as well as exclusive seat cloth and a 10-way power-adjustable driver’s seat, a leather-wrapped multi-function steering wheel and shift knob, and a one-touch recline feature for the rear seats.

At the top of the range, at least in terms of luxury appointments, is the 2013 Ford Edge Limited. Here, the interior of the Edge coddles occupants with leather-trimmed seating (with a heated front row and 10-way power-adjustable front-passenger seat) as well as ambient lighting, while also delivering the full benefits of SYNC with MyFord Touch, a Sony HD audio system, a rearview camera, and an integrated media hub (with two USB ports, audio/video inputs jacks and SD card reader).

Also providing a long list of goodies is the 2013 Ford Edge Sport, but the key difference-maker for this model are its more powerful 305-hp engine, paddle-shifting SelectShift transmission and sport-tuned suspension, finished off with an aggressive appearance upgrade that includes a Tuxedo Black grille, Sport-specific exterior light treatments, and oval-shaped exhaust tips.

A full suite of options, many of them detailed in the technology section, are available to fine-tune the 2013 Ford Edge.

The standard motivator in the 2013 Ford Edge SE, SEL and Limited models is is a 3.5-liter V6 engine that makes 285 hp and 253 lb.-ft. of torque, with that output being routed through a six-speed SelectShift Automatic transmission. The same transmission, but with paddle shifters, is then hooked to a 3.7-liter V6 for the 2013 Ford Edge Sport, which showcases 305 hp and 280 lb.-ft. of torque.

There’s also an EcoBoost option: A 2.0-liter 4-yclinder unit that serves up 240 hp and 270 lb.-ft. of torque along with superior fuel-efficiency performance; EcoBoost drivers swap the cogs with a traditional six-speed automatic transmission.

Unsurprisingly, the 2013 Ford Edge with its high-efficiency EcoBoost engine leads the family in fuel-economy, with the two-wheel-drive model able to post EPA grades of 21 mpg city/30 mpg highway/24 mpg combined. EPA marks with the standard powerplant run 19 mpg city/27 mpg highway/22 mpg combined, while the 2013 Ford Edge Sport essentially matches that line even with its added power, thanks to ratings of 19/26/22.

The Insurance Institute for Highway Safety (IIHS) designated the 2013 Ford Edge a Top Safety Pick after the vehicle rang up the highest possible scores in the IIHS’ four traditional crash-test evaluations. In the government’s safety evaluations, from the National Highway Traffic Safety Administration (NHTSA), the Edge was a 4-star overall performer.

Ford continues to carve out a space as a technology leader in the automotive industry, and the 2013 Ford Edge shows this to its advantage by offering not only the enhanced SYNC system, now with mobile wi-fi capabilities and improved voice-recognition capabilities, but also bonuses like a rear-seat entertainment system, power-operated rear liftgate, the company’s MyKey parental controls system, a panoramic Vista roof, intelligent access with push-button start, navigation, and a long list of driver-assistance measures.

Highlights from the latter department include: