For 2011, Ford reworked the Edge (introduced in 2006) to help the crossover, uh, keep its edge. Among the changes are a new exterior treatment, new engines and some updates to the interior. Currently one of the most popular vehicles in Ford’s lineup, the Edge has found ready acceptance in the marketplace. With new engines offering more power, upgraded interior treatments improving comfort, interesting new technological features upping the “wow” factor, Ford’s Edge seems poised for continued success.

While the overall shape remains the same, the styling update does differentiate the 2011 model from its predecessor quite distinctly. The new front fascia amplifies Ford’s current grille treatment to an unprecedented level. The three bold bars hosting the Ford logo endow the front of the vehicle with considerable bling—whether in black on the Sport model or in chrome on the rest of the lineup. Additionally, the bumper has been revised to incorporate recessed LED cornering lamps. These changes, particularly when taken with the new 22-inch wheels of the Sport model, freshen the appearance of the Edge considerably—without tampering with the good looks that attracted so many buyers to the first generation of the vehicle.

Edge is offered in four distinct levels of trim. The base model is the SE, which comes with cloth seats and single zone manual a/c. The next step up the line is the SEL, which adds a six-way power operated driver’s seat; dual-zone automatic climate control, a leather-wrapped steering wheel, cruise control and steering wheel mounted audio controls. The Limited gets you into leather upholstery, a ten-way power-operated and heated driver’s seat, a high-end Sony audio system with 12 speakers, Ford’s Sync infotainment system featuring two USB ports, a SD card reader and video input jacks, a rear-view camera and a six-way power adjustable and heated fold-flat passenger seat. The top of the line Sport model, adds its own distinct charcoal black leather upholstery for the seats featuring silver smoke metallic inserts for contrast.

Regardless of your choice, you’ll find the ergonomics are mostly good, with but one failure. And this failure seems to plague all of Ford’s cars lately, overly aggressive headrests. They protrude too far forward and can cause discomfort on longer drives. We’ve asked Ford engineers about this and they’ve responded it’s needed to comply with Federal anti-whiplash requirements. However, all of Ford’s imported competitors are also in compliance and none have this problem.

Where Ford is light years ahead of its competitors though is the Sync system, particularly when it is paired with the MyFord Touch (MFT) system. Essentially a black panel with touch points identified on it, MFT means never having to rotate a dial again. Sync, the infotainment system Ford developed in conjunction with Microsoft is rapidly spawning imitators, but still is tough to beat.

Standard for every trim level of the Edge, you can pair your Bluetooth enabled phone or mobile device and take advantage of its functionalities handsfree. Sync accepts verbal commands and touch screen inputs in addition to the more commonplace steering wheel controls. Leveraging Bluetooth and WiFi, Sync delivers information about traffic, news, the weather, and destinations. The system will even read text messages to you.

Ford’s LCD instrument cluster, also way ahead of the game, is only now starting to show up in very high-end cars like the new Jaguar XJ. The cluster is infinitely reconfigurable and changes itself on the fly, depending upon what mode and/or functionality you’ve requested of the Edge.

Going into 2012, Ford is offering three engines to power the Edge, a 2.0-liter turbocharged inline four, the output of which has yet to be announced, a 285-horsepower 3.5-liter V6, and a 305-horsepower 3.7-liter V6 for the Sport model. All three engines are paired with a six-speed automatic transmission and all-wheel drive. The 3.7 and the 3.5 are also offered with front-wheel drive.

As you might expect from such a tall vehicle, there is a fair amount of body roll when the Edge is asked for rapid changes of direction. Still it grips nicely and delivers a lot of reassurance on twisty pavement. Around town, Edge’s reasonable size enables it to be quite maneuverable. U-turns are readily executed and it’s easy to park as well — particularly with the rear-view camera.

Acceleration with both V-6 engines is commendable, although neither qualifies the Edge as genuinely fast. We have yet to drive the turbo four, so we can’t really speak to that experience. However, braking is solid and the ride is smooth and quiet. As you might imagine, the Sport model’s 22-inch wheels and low profile tires do transmit a bit more—shall we say—“information” into the cockpit.

With its unique combination of looks and personal tech, Ford’s Edge has carved out a considerable niche in the marketplace for itself. In fact, many Ford buyers go for it over the similarly priced Flex, even though the Flex is more spacious, offers more utility and is easier to get in and out of.

Yes, Edge’s performance could be better, but for the way the vast majority of Ford Edge buyers will use the vehicle, its performance is adequate. On the other hand, this renewed version of the Edge feels more refined overall than previous versions of the vehicle.

All in all, with the improvements endowed upon the crossover by Ford for the 2011 model year, Ford’s Edge is set to go into 2012 as a strong proposition. 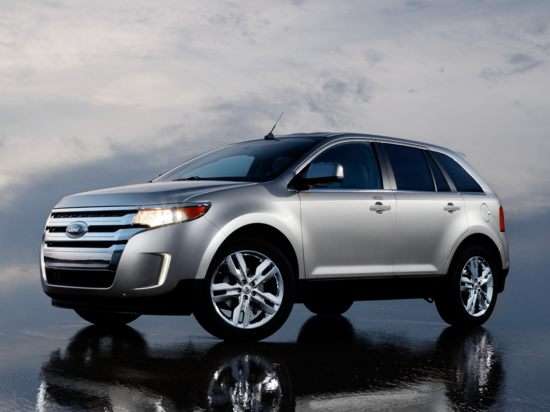