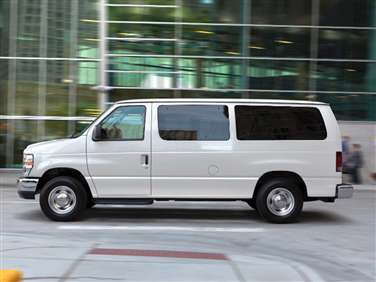 The Ford Motor Company is an American auto manufacturer based in Dearborn, Michigan, just outside of Detroit. During Ford’s time as one of the Big Three American automakers, since 1903, the company has produced and sold many different kinds of passenger vehicles, as well as commercial vehicles. Ford produces cars under the Ford brand, as well as a lineup of luxury vehicles under its Lincoln brand. Ford Motor Company also has investments and partnerships in many other automotive companies around the world, helping the company expand its expertise, resources, and global distribution. The Ford E-Series lineup of cargo and passenger vans, which includes the Ford E-250, was formerly known as the Ford Econoline. That name remains on Ford van models designated for export to Mexico. Ford Econoline and E-Series vans have been produced at the Lorain, Ohio assembly plant until its closure in 2005, and since then, in Avon Lake, Ohio. The Ford E-Series has been the best selling full size American van since 1980, holding a substantial amount of the category’s market share, and in 2007, the E-Series was one of the 20 top-selling vehicles in the United States. As of the 2014 model year, the Ford E-Series vans, including the Ford E-250, are available in North America, the Middle East, and China, and are primarily sold to commercial or fleet customers. Chinese E-Series vans are produced under an agreement between Ford and Jiangling Motors.

Ford introduced the Econoline platform in 1961, and the first Econoline models were compact vans. The line is still in production, the evolution of which is currently sold as the E-Series, although Ford has indicated that there are plans to phase out the E-Series vans in favor of the more modern Ford Transit lineup. In 1968, the E-Series got moved from a truck platform to its own exclusive platform, which has continued through the line’s generations. Over time, the lineup evolved to include three vehicles: the base E-150, the mid-level E-250, and the top-of-the-line E-350 Super Duty. As a cargo van, the E-Series offers a solid combination of capabilities and features; in passenger van guise, the E-Series offers seating capacity for 15 occupants, although the passenger van configuration is not available for every model.

The Ford E-250 van is powered by a 4.6-liter V8 gasoline engine that produces 225 horsepower, but buyers can opt for a 5.4-liter V8 that yields 255 horsepower. Both engines come paired with a four-speed automatic transmission. Although these engine choices are the same as those offered in the E-150, the E-250 nevertheless is rated for heavier duty applications. The E-250 comes in a standard length as well as an extended length that provides an additional 20 inches. The cargo area features a double wall that helps the sheet metal retain its shape against damage from loose cargo. The rear doors feature a 178-degree swing to enable more convenient cargo loading. The Ford E-250 features Bluetooth hands-free wireless integration, USB audio integration, and Pandora internet radio. A Class I Trailer towing package enables the E-250 to tow up to 5,000 pounds.