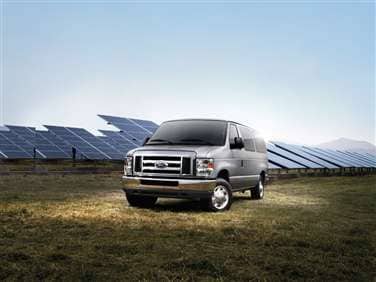 The Ford E-Series is a versatile commercial van available in a wide range of body, wheelbase and interior configurations ranging from a two-door, two-passenger cargo van or cutaway van up to a passenger van with room for 15. The Ford E-Series is manufactured in Avon Lake, Ohio. Main competition to the E-Series include the Chevrolet Express, Dodge Sprinter and GMC Savana.

The market for both full-size passenger and cargo vans is a hotly contested battleground, with the chief combatants being Ford and General Motors. These two companies can claim a fairly equal number of buyers apiece, and together they represent the vast majority of North American van sales. That being said, the van market is also one which does not often see radical change, given that these vehicles are designed with functionality as their primary feature. The boxy shape and industrial-grade driving experience are part and parcel of what it means to be a full-size van.

The Ford E-Series has been on sale since 1961, and the current generation dates back to 1992. Sharing many of the same platform features as the F-Series pickups, the E-Series van was updated in 2008 in order to reflect the more aggressive, utilitarian styling of the Ford Super Duty trucks. Also like the pickups, the E-Series is divided into 150, 250, 350 and 450 versions. Each of these vehicles represents a heavier chassis and drive train than the last, and the heaviest of all can be configured as ‘cutaway’ vans which are designed to have custom cargo containers fitted to them. The vans can also be had in either panel versions, which have steel plating instead of windows, or passenger editions which can seat up to 15 passengers.

The E-Series is available with a number of different engine options, depending upon the weight class of the van. In order to keep costs down a lower output version of Ford’s modular 4.6 liter engine is standard equipment in the E-150, producing only 225 horsepower along with a respectable 286 lb-ft of torque. This engine can also be had in the E-250. An optional 5.4 liter V8 is also available, bumping horsepower up to 255 and torque to 350 lb-ft. The heavier E-350 and E-450 cutaway vans have access to a 6.8 liter V10 and a 6.0 liter diesel engine, with the latter producing a more than adequate 440 lb-ft of torque with the help of a turbocharger. Each van can be fitted with a 5-speed automatic transmission, and the gasoline engines benefit from an additional tow/haul setting that is designed to help heavily loaded vehicles make the most of the power under the hood.

In terms of ride quality, the E-Series vans are very much like any other purpose-built cargo or people hauler: they ride well when loaded, but experience some jostling and shake when empty. The suspension is heavy, and is designed to keep the van level and safe when carrying a full load of people or anything else that can be fit into the cavernous payload area. Interior comfort is acceptable, but couldn’t be called luxurious. The van can be had with air conditioning, power accessories and captain’s chairs, but apart from that, the options list is geared more towards useful items than creature comforts.

It is hard not to recommend the E-Series for anyone who needs a reliable, functional hauler. In addition to its excellent reputation, years of sales on the same platform mean that replacement parts and aftermarket support are widespread, lowering operating costs and ensuring a broad knowledgebase to deal with any issues that might crop up as a result of heavy use.

The 2009 Ford E-Series is a carryover from 2008. The 2009 E-Series is sold in several different body styles and trim levels, tailored to match the van’s intended use. The E-150 and the E-350 are each divided into their own specific trim levels. The E-150 can be ordered in XL, XLT or XLT Premium Package trim. All three versions of the van are powered by a 225 horsepower, 4.6 liter V8 engine that also produces 286 lb-ft of torque. This motor is matched with a 4-speed automatic transmission. The E-350 comes in Super Duty XL, Super Duty XLT and Extended Length versions of both trims. The standard engine for the E-350 is a 5.4 liter V8 that cranks out 255 horsepower and 350 lb-ft of torque while mated to the same transmission as that found in the E-150. A 6.8 liter V10 engine can be ordered as an option for the E-350, and its output is rated at 305 horsepower and 420 lb-ft of torque. A 5-speed automatic transmission handles the shifting duties. Fuel economy ratings for the E-Series vary according to the weight and configuration of each van.