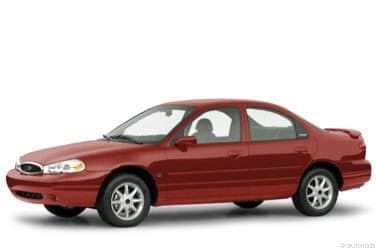 All About Ford Contour

The Ford Contour was the fruit of Ford’s desire to create a competitive global car platform that they could offer in more than just the North American market. The 1995 Ford Contour was released alongside the Mercury Mystique and the European Ford Mondeo, and the company’s significant investment paid off, with all three cars finding an interested market. The Contour was positioned as a compact domestic car that was interesting to drive thanks to its handling characteristics and its choice of drivetrain options.

The 2000 Ford Contour is offered in two different trim levels. The Contour SE Sport boasts a 2.5 liter V6 engine that generates a healthy 170 horsepower, matched with either a 5-speed manual transmission or a 4-speed automatic. The Sport comes with standard air conditioning, a tachometer and the option of a CD player and trunk-mounted multiple CD changer. Power seats are also available.

For those who are interested in a little more power and a lot more fun, the Contour SVT is a much better option. Designed by Ford’s Special Vehicles Team, the same group that puts together the high performance Mustang Cobra and the Ford Lightning pickup, the Contour SVT sees an upgrade under the hood in the form of a higher compression 2.5 liter V6 that pumps out 200 horsepower and 170 lb-ft of torque. The suspension has been tuned not only to provide sublime handling for a front wheel drive car, but also to ensure that torque steer is reduced to a tolerable level. The Contour SVT is only available with a 5-speed manual transmission.

The Contour Sport provides a ride that is a good balance between comfort and agility, and when it comes to fuel mileage the V6 is a real miser, approaching 30 miles per gallon on the highway. The manual transmission gets the most out of the engine, as the automatic is somewhat dull to drive. However, for those seeking excitement the Contour SVT is the real deal. There are few exterior differences between the Sport and the SVT – performance rubber wrapped around 16-inch wheels and tweaked aerodynamics – but behind the wheel, the driving experience almost suggests an entirely different car. With a tighter, more responsive suspension and large vented front disc brakes, the SVT handles twisty roads with ease, gobbling up switchbacks and hairpins with an alacrity not often seen in its class.

In either guise, the Ford Contour is an excellent find, especially considering the low purchase price. Excellent fuel economy, reliable drivetrains and in the case of the SVT model bargain basement sports sedan performance are all hallmarks of the Contour. On the downside, the interior of the vehicle does not feel as though it benefited from the same amount of attention as the vehicle’s mechanical components. While the design is acceptable, materials choice could have taken a more upscale route, and fit and finish does not hold up to serious wear over time.

The 2000 model year was the final year for the Ford Contour, as the company decided to expand its lineup of small sport-utility vehicles in place of continuing development of this vehicle.