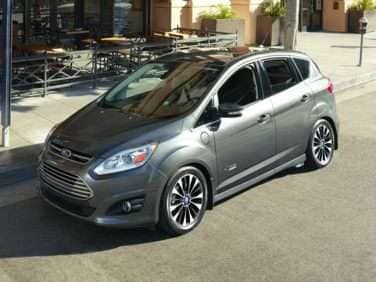 All About Ford C-Max Energi

New for model year 2013, the Ford C-Max Hybrid is essentially four-door wagon—although its tall profile also suggests it is something of a crossover utility vehicle as well. Offered in a single state of trim, the innovative Ford hybrid comes quite nicely equipped with standard features such as keyless entry and start, parking sensors, dual-zone climate control, and seat heaters.

The Ford C-Max Energi is a plug-in hybrid. The Ford’s lithium ion battery pack is good for 7.6-kilowatt hours. Ford claims an all-electric range approaching 21 miles at speeds of up to 80 miles per hour. Naturally, once the battery pack is drained, the gasoline engine takes over. Plugging the C-Max Hybrid into a 240-volt charging system will rejuvenate its battery from a completely discharged state in approximately three hours. As with a typical hybrid, braking and coasting also recharges the battery pack.

The C-Max is designed—much as is Chevrolet’s Volt—to rely primarily on its electric motor. The gasoline engine only starts when all of the usable electricity in the battery pack has been depleted. This typically means the C-Max runs preternaturally quiet, as does an EV. Further, the electric motor is quite powerful, demonstrating the capability to set the C-Max Energi into brisk motion from a standstill—and keep it moving up to 80 miles per hour.

As a practical automobile, the Ford C-Max Energi offers excellent passenger capacity, although cargo capacity is somewhat compromised. Still the rear seats do fold, but the packaging of the battery system eats into the cargo compartment just the same. Cargo capacity is rated at 42.8 cubic feet with the rear seat folded. With it deployed you’ll get 19.2 cubic feet. (Not exactly stellar for the class.)

Visibility is great all around—thanks to the tall roof and the high seating position. Ford’s designers went a bit “futuristic” with the dash layout, so at first glance it can be a bit bewildering. The inclusion of the MyFordTouch system does improve usability however, and the Sync system also supports voice commands.

The only real challenges facing the C-Max Hybrid are pricing, which comes in a bit higher than many of its conventional competitors, and cargo capacity—which is less than its competitors. However, the Ford C-Max Hybrid Energi’s EPA rating of 44 miles per gallon in the city, 41 on the highway, and 43 combined is quite the compelling argument in its favor.