With the press embargo now lifted for the 2013 Chrysler Group family, you'll no doubt be reading about quite a few enhancements to the automaker's stable, and that includes the news that the 2013 FIAT 500 will finally be able to reach the 40-mpg mark—and introduce a serious sound upgrade thanks to the segment’s only audio system with Beats by Dr. Dre technology.

When you also remember that the 2013 Fiat family will feature a new turbocharged member that slots between the standard 500 and the hi-po Abarth model, continued growth for the Chrysler Group’s Italian import seems likely.

The big achievement on the fuel-economy front was realized by a minor adjustment of the final drive ratio in the 500’s five-speed manual transmission. But the result—EPA marks of 31 mpg city/40 mpg highway/34 mpg combined—could have a major impact on the thinking of today’s shoppers, who are once again putting a strong focus on fuel economy. Which means that Fiat’s decision to also expand availability of its DIY transmission to the up-level 500 and 500c Lounge editions, allowing even more drivers to enjoy the brand’s new fuel-economy marks, is a good thing too.

On the other hand, while the manually transmissioned 500 benefits from improvements of 1 mpg/2 mpg/1 mpg in EPA testing, the numbers for the six-speed automatic do remain at 27/34/30.

Still, the 500 is now the only car in its class to reach the 40 mpg on the highway and compares as follows to its key rivals:

In addition to its segment-best highway fuel-economy grade, the 2013 Fiat 500 also will be the first in its segment to offer a Beats by Dr. Dre high-definition sound system, designed by the Grammy-award-winning musician/producer specifically to provide the same kind of audio performance as in a professional recording studio. Available in both the 500 and 500 Cabriolet, the audio setup packs a 368-watt punch, as well as an eight-channel amplifier with Beats Audio digital sound processing, six premium speakers, and an eight-inch dual-voice coil subwoofer with trunk-mounted enclosure.

(The Chrysler Group is currently the only automaker to offer Beats by Dr. Dre audio systems, which are also available in the Chrysler 300 and Dodge Charger.)

The new model year also brings a new model to the Fiat lineup: The 2013 Fiat 500 Turbo. It provides a highly athletic driving experience that builds on its turbocharged MultiAir 1.4-liter I4 engine, boosted up to unleash 135 hp and 150 lb.-ft. of torque. Yet even with those increases—of 34 more horses and an additional 52 lb.-ft. of torque as compared to the standard 500—the Turbo will attain 34 mpg on the highway.

In keeping with its performance positioning, the 500 Turbo will be available solely with a track-tested five-speed manual transmission, while also gaining some aggressive new exterior and interior style enhancements. 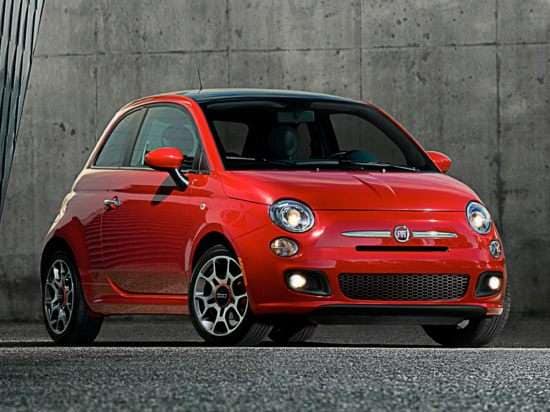