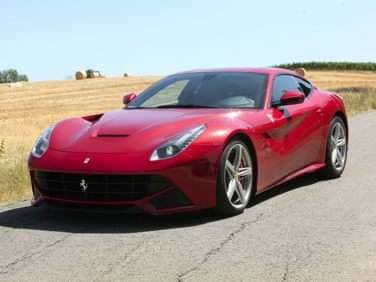 All About Ferrari F12berlinetta

The Ferrari F12berlinetta is a grand tourer that the Italian performance automaker premiered in 2012. The debut of the F12berlinetta, which took place at the Geneva Auto Show, announced not only the launch of the new grand tourer but the retirement of Ferrari’s outgoing grand touring series, the Ferrari 599.

The F12berlinetta began acquiring acclaim shortly after its release. “Top Gear” named the F12berlinetta the Supercar of the Year for 2012, and its engine won two International Engine of the Year titles. That engine, a 6.3-liter V12, is front mid-engine mounted in the F12berlinetta and achieves 730 horsepower.  The 0-60 acceleration time in the F12berlinetta is officially 3.1 seconds, although some sources report unofficial times as low as 2.8 seconds. The F12berlinetta’s powerplant represents significant improvements over the outgoing Ferrari 599 series. It was carefully engineered to be both more efficient and more powerful than the previous car, despite the fact that it is naturally aspirated and eschews the forced induction technology that’s commonly employed to achieve such objectives. The F12berlinetta features stop-start engine technology that helps the car reduce fuel consumption at idle, which helped the car obtain a 30 percent improvement in fuel consumption over the Ferrari 599 Series. The F12berlinetta’s powerplant is paired to a seven-speed dual-clutch semi-automatic transmission operated by paddle shifters near the steering wheel. This gearbox features shortened gear ratios to better complement the engine’s power.

Other factors contribute to the Ferrari F12berlinetta’s improved fuel economy and performance, as well. The F12berlinetta features an extremely aerodynamic body, perfected in part by Ferrari’s extensive racing experience. Airflow over the car was also carefully researched through the use of wind tunnels and computational fluid dynamics, ensuring that the car cuts through wind resistance as effectively as possible. An air channel that Ferrari calls the Aero Bridge runs up the hood of the car, across the flanks, and then down the sides, directing air in a beneficial way that creates downforce, which helped achieve an increase of 76 percent over the downforce of the Ferrari 599 GTB. The F12berlinetta also has automatic brake ducts that open only when the brakes are hot and need to be cooled; the rest of the time, the ducts are shut to aid airflow. The body of the F12berlinetta was designed by the Ferrari Styling Centre in conjunction with the Italian coachbuilding firm Pininfarina. Among all the aerodynamic design touches, there are a lot of styling cues that carry over from the rest of the Ferrari model lineup, such as a similar front grille and headlights. The interior features extensive use of leather, aluminum, and carbon fiber.

There’s plenty more up-to-date technology underneath the aerodynamic skin. The Ferrari F12berlinetta is based on an aluminum space frame chassis composed of a dozen different aluminum alloys. The combination is designed for premium strength and light weight, offering a 20 percent strength boost over the Ferrari 599 Series despite a weight reduction of 150 pounds. The F12berlinetta is rounded out by carbon ceramic disc brakes, an electronic limited slip differential, stability control, and traction control, most of which can be adjusted by steering wheel mounted controls.