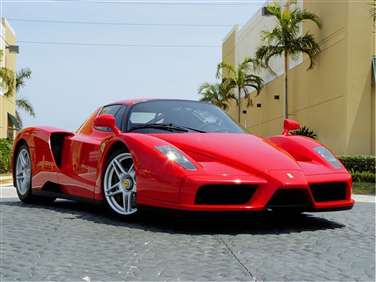 All About Ferrari Enzo

The Ferrari Enzo was an extremely limited edition production car that was built from 2002 until 2004; during that timeframe, just 401 examples of the Ferrari Enzo were built. The car was named after the automaker’s founder, Enzo Ferrari, and was designed and built to commemorate Ferrari’s first Formula 1 racing victory of the millennium. Most of the Ferrari Enzo cars that were produced were offered for sale only to established previous clients that were selected by Ferrari, and the first 349 cars (the initial allocation) were sold before production even began. Ferrari later added another 50 cars to the production run, for a total of 399. A 400th Enzo was built and donated to the Vatican, and later sold at auction for $1.1 million.

The Ferrari Enzo was a mid-engine coupe with a 12-cylinder powerplant. It featured extensive use of Formula 1 racing technology and was constructed with a carbon fiber body for strength and weight reduction. It had a race-friendly electrohydraulic shift transmission, and stopping power was provided by 15-inch carbon fiber silicon carbide ceramic composite Brembo disc brakes. Wheels are 19 inches and are secured to the car by a single lug nut. The Enzo was not a race car, though, since it also employed features that are not allowed in F1 racing, such as traction control and active aerodynamics courtesy of an automatically-activated rear wing to control downforce. The Enzo also features four-wheel independent suspension with adjustable push-rod actuated shock absorbers. Front and rear anti-roll bars help round out the suspension. The V12 powerplant in the Enzo was based on the Maserati Quattroporte’s V8 engine. It uses Bosch Motronic fuel injection. The Ferrari Enzo V12 produces 651 horsepower. The powerplant is paired to a semi-automatic transmission (known to Ferrari enthusiasts as the F1 gearbox) that uses paddle shifters. LED indicators let the driver know when to shift, and the paddles engage an automated shifting and clutch design. This type of transmission is known for abrupt, sometimes harsh, shifting. The Ferrari Enzo boasts a 0-60 acceleration time of 3.14 seconds and has a top speed of 221 miles per hour. The V12’s fuel economy is rated at 12 miles per gallon city, 18 miles per gallon highway. Much of the technology that was developed specifically for the Enzo later made its way to other specially focused projects and limited production run Ferraris, gathering data and feedback from wealthy, loyal Ferrari customers as well as racers to continue improving Ferrari technology.