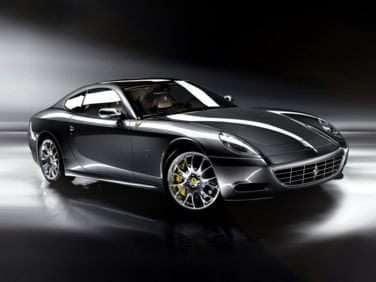 All About Ferrari 612 Scaglietti

Produced by the storied automaker from 2004 to 2011, the Ferrari 612 Scaglietti was an extremely high performance 2+2 Grand Touring automobile in the purest sense of the phrase. As its nomenclature suggests, the Ferrari GT car was powered by a 5.7-liter (rounded up to six) 12-cylinder engine. The Scaglietti (skall-YET-e) name was intended to pay tribute to Sergio Scaglietti, a good friend of Enzo Ferrari, and a trusted coachbuilder for Il Commendatore as well.

During the 1950’s, most of Ferrari’s sports racing prototypes emerged from Scaglietti’s workshop. Further, Scaglietti is credited for coming up with the integrated headrest hump employed by Ferrari's racing cars. The 612 Scaglietti's body was produced at Scaglietti’s former facility in Modena, Italy. The engine and interior were installed at the Ferrari factory in Maranello. Many of the exterior design cues came from the custom 1954 Ferrari 375 MM, commissioned for the actress Ingrid Bergman by her husband, film director Roberto Rossellini (yes,actress Isabella Rosellini's father and mother).

The Ferrari 612 Scaglietti’s 5.7-liter V12 (which it shared with the 575M Maranello) churned out 532 horsepower and 424 ft-lbs of torque. The rear-drive coupe used a conventional six-speed manual transmission at launch as standard equipment. However, a six-speed single-clutch automated manual was also offered as an option. (Ferrari recalled Scaglietti models with the automated manual transmission built between 2005 and 2007 because heat from the car could affect the clutch sensor in the automated manual gearbox and cripple the car—as well as potentially cause a crash.) Top speed was quoted at 200 miles per hour, and the stated zero to sixty was four seconds. Also featured on the 612 Scaglietti was Ferrari’s “manettino” drive mode selector. This gave the driver the capability of selecting from among five different driving modes for the car.

A highly luxurious automobile, at launch the Ferrari 612 Scaglietti was fitted with xenon headlights, an adaptive suspension system, a power-closing trunk, automatic dual-zone climate control, power front seats, and a navigation system—all as standard equipment. A Bose audio system, Bluetooth, and a 15-gig hard drive were included as well. Later in the model’s production run the standard equipment list was expanded to include parking sensors and an upgraded navigation solution. Carbon ceramic brakes, heated front seats, fitted luggage and run flat tires were offered as options. The 612 Scaglietti was a true four seater, with adequate room in the back seat for two adults—although getting back there wasn't exactly easy.

A police version of the Scaglietti was built for the UK market in 2007.