620 horses, all packed into a pretty red package

What it is
By Thom Blackett
Ferrari is a brand synonymous with Italian elegance, finesse, power, and supercar performance. With a promise to continue the family heritage, a new two-door coupe, the V12-powered Ferrari 599 GTB, fills the void created by the departure of the 575M Maranello, a magnificent supercar last produced for the 2004 model year. And for its official pictorial debut the car is, of course, red.

The Ferrari name symbolizes the best in automotive design and outstanding performance, though the time has come where even relative commoners like the Chevrolet Corvette Z06 and Dodge Viper can better the Italians in a run to 60 mph. With its 620-horsepower V12, the 2007 599 GTB matches or beats its equal and lesser competitors in regards to performance, yet does so with the beauty and exclusivity only available with a Ferrari.

For clutch pedal aficionados, the 599 GTB can be equipped with a six-speed manual transmission. Others, however, may enjoy the F1-SuperFast automatic that executes shifts in mere milliseconds. Other technological advances include what engineers call a magnetorheological fluid suspension system. Think of it as a shock absorber filled with metal bits floating in a liquid, stiffened or softened by “an electronically controlled magnetic field” depending on road conditions. Ferrari’s system is kind of like GM’s magnetic ride control suspension in the Corvette. There’s also something called F1-Trac, which is Ferrari lingo for an impressive handling package. In short, F1-Trac works with a standard stability control system and suspension software to determine how much traction the 599 GTB has and will have, and subsequently adjusts engine output accordingly. Sadly, F1-Trac cannot measure driver intelligence, too.

Anyone who has wondered what big bolsters look like needs to check out the 2007 Ferrari 599 GTB. Swathed in soft premium leather with carbon-fiber backing, the 599 GTB’s buckets feature substantial bolsters on the seat bottom and back, and integrated headrests with cutouts trimmed in carbon fiber.

Tucked neatly into the center console are simple controls for the dual-zone climate control system, which sits directly below the audio system, while the gauge cluster, including a 10,000-rpm tachometer, is within the driver’s direct line of sight. In front of that is the steering wheel with what’s called the manettino, a term that refers to a master switch on the 2007 Ferrari 599 GTB’s steering wheel. Within finger’s reach are controls for the F1-Trac suspension system, the F1-SuperFast transmission (if equipped), and the magnetized suspension.

With few exceptions, Ferrari has a long history of creating beautiful and exhilarating automobiles. The 2007 599 GTB suggests that the company’s winning streak will continue on unabated, as this fine coupe, with unmistakable Ferrari styling and performance from a V12 engine derived from the legendary Enzo, finds its way into the hands of anxious owners later this year. 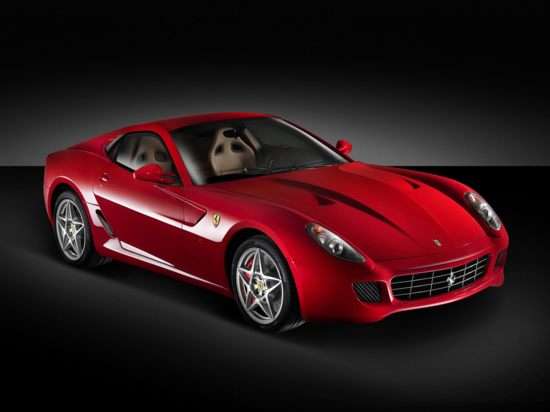