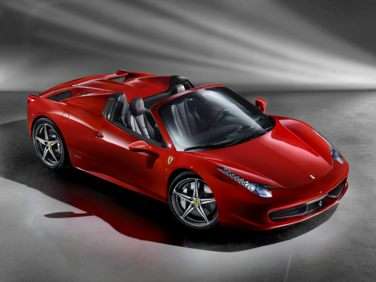 All About Ferrari 458 Spider

First shown at the 2011 Frankfurt Motor Show, and introduced for sale as a 2012 model, the Ferrari 458 Spider is the convertible version of the 458 Italia. The contemporary open version of the continuation of the run of mid-engine V8-powered Ferrari models dating all the way back to the 308 GTB of 1975.

The 458 Spider is the first mid-engine Ferrari model to feature a retractable hard top. Made of aluminum, the roof can be stored or deployed in fourteen seconds. To incorporate it into the design of the 458 Italia, Ferrari’s engineers reworked the rear window and engine cover of the coupe. While the retractable hardtop design is a bit more complex than the traditional soft convertible roof, it is actually lighter. The Ferrari 458 Spider is currently the only mid-engined convertible model in the marque’s lineup of road going automobiles.

Anyone familiar with Ferrari’s naming conventions will tell you the 458 Spider is powered by a 4.5-liter V8 engine (4-5-8, get it?). In this case, that engine generates 562 horsepower and 389 ft-lbs of torque. Featuring direct fuel injection, the engine’s output passes through a seven-speed dual clutch automated manual transmission on its way to the rear wheels of the seductively shaped automobile. In addition to the obvious wind in your hair benefits of piloting a convertible, the open version of Ferrari’s 458 treats the occupants to an unfiltered aural experience from the engine.

By the way, Pininfarina designed the 458’s body, as has the company for the majority of Ferrari’s models for many, many years. Speaking of that body, it is bristling with subtle aerodynamic aids to improve roadholding, decrease drag, and improve the cooling of various mechanical components. As an example, in the front grilles of the Ferrari Spider there are small deformable winglets. As the speed of the 458 increases, the pressure of the air passing over them actually changes the shape of the winglets to diminish the size of the opening of the radiator intake—thus reducing drag.

Michael Schumacher, who won the Formula 1 championship seven times, had a hand in the layout of the interior of the Ferrari 458 Italia and the 458 Spider. One of his suggestions was the steering wheel design, which incorporates many of the features and controls normally found on the dash of more conventional cars. Ferrari claims a zero to 60 of 3.1 seconds and a top speed of 202 miles per hour.