Living With a Snake

Introduction
By Dan Lyons
Viper's ultimate irony may be this. By the time most guys are in a position to buy it, they're in no condition to drive it. It's a car that doesn't make a lot of concessions to the driver, but that's been part of the allure from the start - a barely civilized, take-no-prisoners attitude. As close as you can get to a modern day Shelby Cobra, the Viper's elemental charms have lured many to Dodge dealer showrooms. But, the stiff price tag requires a buyer with solid finances - and a flexible attitude. Viper is an enigma. A 500-horsepower, contradictory combination of everyday driver and raw race car. Two years after the introduction of the second generation, it's time for a second take on the snake.

As with any exotic sports car, the Dodge Viper is sexy, rare, and rarely seen. The second-generation Vipers are low, wide and voluptuous, so aside from the car-clueless among us, people notice. Necks crane, takes give way to double takes. Viper's Gawk Factor is nearly a perfect ten. Fellow motorists speed up, slow down, circle, tailgate, and otherwise perform tricks in order to get a better look. This is not a car for the shy.

Ten cylinders, 505 cubic inches, 500 horsepower, 525 lb.-ft. of torque. Zero to 60 acceleration in about four seconds flat, the quarter-mile turned in the low twelves. Using the old Shelby Cobra performance benchmark of 0-100-0, the Dodge Viper logs a time of 13 seconds.

These numbers would impress even in the classic muscle car era - with some important differences. The 8.3-liter V-10 is as content chugging stoplight to stoplight as a minivan's V6, with no old school worries like loading up or overheating. And when you clear traffic, you can put a time-warp distance between yourself and the rest of the pack at the drop of the hammer, thanks to tire churning torque at almost any speed.

Getting you from gear to gear is a Tremec six-speed stick. The Hurst shifter has a meaty, pool-ball-sized knob and a hefty, positive throw, with the only dings being an occasional aversion to getting into reverse and a fuel-saving skip-shift feature that wants to shunt you from first gear to fourth. Like lots of bad ideas, the intention is good - promoting better mileage - but we do wish that there was a way to accept the obvious. Viper's lousy mileage is part of the cost of life in the fast lane.

The steering has a comfortable heft, thanks to perfect levels of boost for the power assist. The wide Viper feels its size in tight corners but still has tenacious grip. Credit for this impressive stick goes to the new generation Viper's stiffer frame, improved suspension geometry and the staggered-sized, Michelin Pilot performance tires. The run-flat rubber (275/35ZR18 in front and 345/30ZR19 in back) possesses admirable wet and dry adhesion. However, a short sidewall run-flat tire will let you know when you've hit a bump, and the wide treads occasionally suffer from a short attention span, too. The tires will hunt on crowned roads, keeping the driver attentive. Viper's big, vented discs with ABS get it done nicely in the braking department, hauling the car down from 60 mph to zero in less than 100 feet. It sticks, and it stops.

One of the biggest improvements of Viper-present vs. Viper-past is the top. Formerly fitted with an ill-fitting, clumsy, targa toupee, the new car is a true convertible, with a truly fine ragtop. Snug and weather-tight when up, the manual lid folds easily in a neat, semi-enclosed stack, without need for a boot. Top down, there's little wind in the cabin, thanks to the car's high belt line and high backed bucket seats.

The footwell in new Dodge Vipers has a skosh more room than the previous generation cars (enough for a dead pedal), and there's less offset between the pedals and your legs. These improvements are appreciated, though it's still tight quarters for big feet and my size 11½'s occasionally clipped the side of the pedal next to the one I was aiming for. Wide shoes? Fuhgeddaboudit.

The cabin is snug but the relationships are right - arm's reach to shifter, switches within grasp. Thickly bolstered sport seats keep you in place during hard driving. A quartet of gauges march up the center stack in formation, while below and to the side, controls for the climate and sound systems are refreshingly uncomplicated. The speakers include a small sound box embedded in the shotgun position between the two front passengers. It generates 310 watts, enough to make itself heard over the collective din of wind, engine and road noise. Out back, the 8.4 cubic foot trunk will hold a golf bag or several soft-sided duffels.

Several steps more refined than the car it replaced, the latest Dodge Viper is nonetheless still most notable for its wild streak. In a world of increasingly exotic exotics - high performance cars with high maintenance personalities - the Viper remains raw and unrepentant - and surprisingly easy to live with. 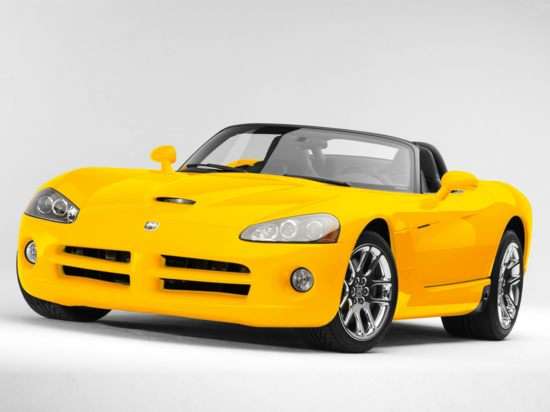