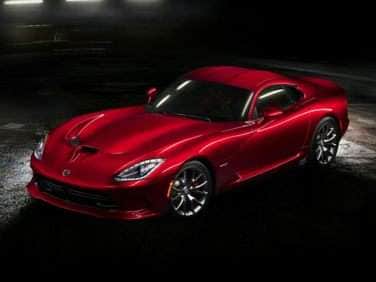 All About Dodge SRT Viper

Until the 2013 model year, there was the Dodge Viper. Then, Dodge’s SRT performance nomenclature became a brand unto itself, and the Viper two-seat sports car was reintroduced for its fifth generation as the SRT Viper. SRT Vipers are built in Detroit, Michigan, like the earlier generations of Dodge Viper. The Viper is a front mid-engine, rear-wheel drive vehicle that has been available in both coupe and roadster body styles. The Dodge Viper entered production from 1992 until 2006, again from 2008 until 2010, and reentered production in 2012 for the car’s SRT revival for the 2013 model year. The fifth generation of the Viper is expected to remain in production through the 2014 model year, and, like all previous Viper models, features a V10 engine.

The Dodge Viper was in the works as far back as 1988, concepted as a spiritual successor to the Cobra. An early Viper concept was introduced at the North American International Auto Show in Detroit in January 1989, and was met with positive feedback. The first generation of the Viper went into production in November of 1991, with first sales in January of 1992. It was a roadster powered by a 400-horsepower V10 engine paired to a six-speed manual transmission. Lamborghini, which was also owned by Dodge’s parent company, Chrysler, at the time, helped Chrysler turn a heavy truck engine into one suitable for a sports car. The engine was fitted into a tubular steel frame wrapped with fiberglass body panels, and the car was absent any kind of creature comforts or extraneous electronics. The first generation Viper, in production until 1995, could accelerate from 0-60 in four seconds and had a top speed of 180 miles per hour. The second generation Viper, available from 1996 until 2002, featured a very similar body (with the addition of a coupe model), a bump to 415 horsepower, and an upgraded chassis design and suspension. Airbags were added in 1996,   anti-lock brakes debuted in 2001, and other amenities were selectively added over the course of the second generation.

The third generation of the Dodge Viper was on the streets from 2003 until 2006, although the 2006 production run was continued well into 2007 as Dodge prepared for the 2008 refresh. This generation was available in coupe and roadster form, and featured a redesigned body and chassis, powered by a V10 engine that boasted a power increase to 500 horsepower. The fourth generation, from 2008 until 2010, received another significant boost in output, this time to 600 horsepower, thanks in part to the introduction of an 8.4-liter block. This generation Dodge Viper was also available as a coupe and a roadster, and, other than the powerplant, featured just minor changes from the 2006 model year. This generation was short-lived, through, as Dodge decided that production would end in July of 2010.

The introduction of the SRT brand marked a new opportunity for the Viper, which was unveiled at the 2012 New York Auto Show and debuted as a two-door 640-horsepower 8.4-liter V10 coupe for the 2013 model year. The fifth generation Viper is equipped with all kinds of amenities, like electronic stability control and a Harman Kardon audio system, seen as unnecessary luxuries in previous versions of the car. The SRT Viper achieves a top speed of 206 miles per hour.