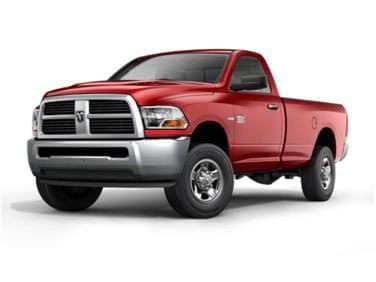 The Dodge Ram is now known as the Ram, since in 2010, the Chrysler Group changed the branding of its well-known pickup trucks. But the Dodge Ram still has history. The name emerged in 1981, as part of a rebranding of the Dodge truck lineup, based on the Dodge hood ornament that had been around since 1933. The first trucks bearing the Ram name were called the Ram and the Power Ram, but the brand gradually grew until it formed a comprehensive lineup of full-size pickup trucks. Ram trucks are built in Chrysler Group truck assembly facilities in Coahuila, Mexico and in Warren, Michigan, in the United States; the Dodge Ram 2500 came from the Mexico assembly plant. Ram trucks primarily compete against Ford and Chevrolet trucks in North America.

The Dodge Ram has been marked by long development and design cycles between generations, so, over the course of the trucks’ lives, they’ve undergone only a few significant revisions. The Dodge Ram 2500 was initially offered in both light duty and heavy duty ratings, but this was later deemed to be unnecessary based on sales figures. The Ram lineup was redesigned in 1994, although most available engine configurations were carried over from the first generation. The Dodge Ram 2500 was marketed for two of its preferred drivetrain options: its 8-liter V10 engine designed specifically to extract superior towing capacity for customers who preferred gasoline engines, as well as a 5.9-liter Cummins turbo diesel offering. Other engines were available, however. The second generation Dodge Ram 2500 came with a 6-foot box and a quad cab. The cab was designed for convenience, featuring a large glove compartment, storage in the center armrest, and updated instrument panels. The interior, as well as some exterior components, were given a minor refresh for the 1998 model year.

The third generation Dodge Ram was phased in over two model years, 2002 and 2003. The Ram 2500 was delayed until 2003 in part because it was slated to receive a new Hemi 5.7-liter engine, which was not ready in time. When the new Ram 2500 made its debut, though, the changes were comprehensive. In addition to the new drivetrains, it had a new frame, suspension, interior, exterior, and quad cab configurations. The Ram 2500 and 3500 retained their live axle suspension, however. A new Cummins 6.7-liter turbo diesel engine became available in 2007 to replace the outgoing 5.9-liter unit.

In 2008, Dodge introduced the fourth generation Ram at the North American International Auto Show. This generation featured a new four-door cab, new suspension, and a new storage system for the truck’s bed. In 2009, the Chrysler Group reorganization resulted in the creation of the Ram Trucks brand, separating the Ram from Dodge. In 2011, Ram trucks became known for being the only pickup truck lineup that still had a manual transmission offering, as Chevrolet and Ford had phased out their manual gearbox options on their trucks. For the 2014 model year, Ram 2500 and 3500 trucks got an air suspension option.