Super trucks. The breed has only been around in earnest since the Nineties, but Chrysler Corp. can stretch its roots in the ranks back a little further than that. In 1978/79, Dodge had a pickup called the Li’l Red Express Truck. A modified version of their off the rack Adventurer D150, the Li’l Red was the fastest American production vehicle of its day.The reasons why that truck was able to make that claim had to do with a good motor and bad competition. In the late Seventies, there was precious little around that could get out of its own way. These days, the roads are thick with fast cars and trucks. It’s high tech and high priced compared to old school iron, but high performance is everywhere, including the muscle truck segment. Since the early Nineties, the Ford F150 Lightning has been a perennial powerhouse in this class. Its reign as king was interrupted this year by the rollout of the new Dodge Ram SRT-10. Modern muscle is light years ahead of classic muscle in terms of sticking and stopping, but the bottom line is still motor. The engine that got it done for the 70’s Express was the 360 V-8. The motor in charge this time is in a different class entirely. SRT-10 the truck borrows its motor from SRT-10 the car. Fitted with a Viper V-10, coupled to a six speed manual transmission, the top Ram deals a hand where fives are wild: 505 cubic inches, 500 horsepower, 525 lb. ft. of torque, a 500 watt sound system and 0-60 times in the low five second range.

Truck or car, nothing exceeds like excess, and the Viper motor’s enormous power dominates the driving impressions. SRT-10 oozes torque and hazes the tires at the drop of a shoe. Though its aerodynamics owe more to a cinder block than a wind tunnel, the SRT-10 has been clocked at 5.2 seconds from 0-60. It’s 154 mph over a flying kilometer was good enough to earn it the title of, “world’s fastest production pickup”. Despite its mammoth strength, it is a very tractable motor, happy to putt around town or float down the freeway. Indeed, it can be said that the SRT-10 will pass just about anything except a gas station. The Viper motor’s mass and muscle allow for coma-like gearing – at 75mph in 6th, the engine is turning a barely breathing 1,500 rpm. That said, EPA estimated gas mileage is 9 city/15 highway. This wallet-sapping economy is off-set by two factors. First, the gas tank is large – 26 gallons – allowing you to postpone trips to the pump. Finally, anyone buying a 500 hp pickup is more likely interested in ET’s than mpg’s, and the gas hoggery is therefore expected to matter to buyers not a whit.As impressive as the straight line speed in the SRT is this truck’s willingness to mix it up in the corners. The chassis rolls on 22” rims shod with meaty, 305/40R22 Pirelli Scorpions. The truck has been lowered 1” in front and 2.5”in back, springs shortened and stiffened, a rear sway bar added, along with Bilstein shocks.

Another shock is mounted north/south between frame and rear axle to snub wheel hop. Airflow management is handled by a large splitter reducing lift up front, while a rear wing adds downforce and reduces drag (it also moves out of the way for bed access if need be). The result of the above is a truck with a surprisingly sporting disposition when it comes to handling. A lowered truck is still taller than a car, but this is a very good handling truck, more at ease in an autocross than many autos would be. Ride quality is generally fine on smooth pavement. On rougher road surfaces, though, the SRT-10’s short suspension travel and narrow sidewalls make themselves felt, with judders and shudders in the cabin. How much of an issue this is depends largely on what the pavement’s like in your part of the world.Inside, the Uber truck is essentially a two seater. The wide center console can flip up to serve as a seatback, allowing room for a theoretical third passenger, thought that person would have to come to an understanding with the dogleg Hurst shifter, dead ahead. On either side of center, seating is much more accommodating –a set of thick, well padded buckets envelope driver and passenger, and a full set of white faced gauges keep you informed.

Controls and switchgear are truck simple. The regular cab SRT has little inboard cargo room: there’s space behind the seats for a couple of toolboxes or a pair of weekend getaway type rollers. But being a pickup, there’s a 6’3” box in back, too. 2005 versions of SRT-10 will offer two new ways to improve your storage options. First, an aluminum tonneau cover provides privacy and protection for your rear gear. It’s optional on SRT-10 and standard on Quad Cabs. Yes, I said Quad Cabs – the second bit of storage news concerns the ’05 début of a true, four door SRT-10 (late fall/early winter availability). In addition to added passenger room inside, it has the capability for pulling more along behind. With the Viper V10 mated in this case to a four speed automatic transmission and 4.56 rear gears, the Quad SRT will tow up to 7,500 lb.You never know when Lightning might strike again (maybe 2006?), but for the foreseeable future, SRT-10 is the king of the pickup truck hill. Its Viper motor provides all the smoke ‘em when you got ‘em throttle response of Dodge’s other resident reptilian, and it rumbles and burbles with a tone that might even best the car. All that go and sledgehammer styling make the Ram charger an interesting choice for the high performance buyer. It hauls, and it hauls!

What's the plus side?
Sledgehammer styling, mind bending performance in a pickup truck. Handling that rivals many performance cars, with a bed in back that you can haul stuff in. How cool is that?

And the downside?
On long trips, SRT-10 suffers the same problems as in many hi-po vehicles: a choppy ride on rough pavement and limited cargo space. Gas mileage is not pretty, either. 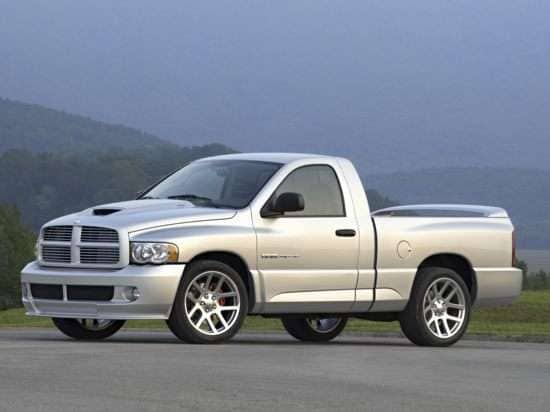