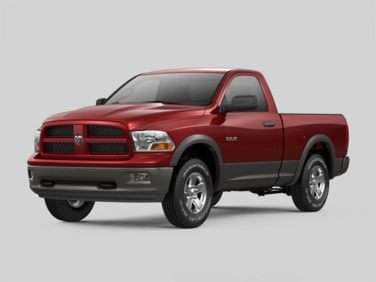 The Dodge Ram is a versatile full-size pickup truck available as a two-door, three-passenger Regular Cab, a four-door Quad Cab that seats up to six passengers and a four-door Crew Cab that also seats up to six passengers but with added interior space. The Dodge Ram 1500 is manufactured in Fenton, Mo. and Warren, Mich., while the heavy-duty Ram models (2500/3500/4500/5500) are manufactured in Fenton, Mo. and Saltillo, Mexico. Main competition to the Ram include the Ford F-Series, Chevrolet Silverado, GMC Sierra, Toyota Tundra and Nissan Titan.

The Dodge Ram has been Chrysler’s full-size pickup since 1981. Although in the first decade or so of its existence the Ram was an also-ran when compared to the very popular Ford F-150 and the Chevrolet C/K series, a dramatic re-design in the early 1990s caused many truck drivers to sit up and take notice. A bold, in your face style combined with both a powerful Cummins turbo-diesel engine and an eye-popping optional V-10 engine brought many converts over to the Dodge fold.

While the V-10 may be on its way out for 2009, the muscular good looks and cast-iron workhorse engine remain with the 2008 Dodge Ram. In addition to the 10-cylinder power plant, a torque-happy, six-cylinder Cummins is available as well as a pair of powerful V-8s and a fuel-efficient V-6. Entry-level trucks start with a 3.7 liter V-6 engine making a fairly low (for a full-size pickup) 215 horsepower. However, it is easy for buyers to step up to a V-8 at the next trim level, and all 4-wheel drive trucks come standard with 310 horsepower 4.7 liter power plant that also makes 330 lb-ft of torque. A 5.7 liter Hemi® V-8 is the top engine available in the 1500 and the base engine for the heavy-duty Rams. 8.0 liter V-10 engine both dual for the hearts and minds of power-hungry truck buyers, while one of the Cummins turbo-diesel engines features an astonishing 600 lb-ft of torque - excellent for those who need to pull a boat, livestock, or even a house.

Aside from engine choices, the trim levels in the Dodge Ram reflect the same austere-to-opulent progression that is common with full size pickup trucks. Base models are simple cloth seat and hand-crank window affairs, but the top of line Laramie package adds leather, air conditioning, an improved stereo system and a host of other amenities that transform the vehicle into a highway cruiser suitable for long, cross-country trips – if fuel mileage isn’t a concern. Even the smallest V-8s in the Dodge stable get far less than 20 miles per gallon, making the Ram an expensive vehicle to run as a daily driver. As is the case with most diesel engines, the diesel-powered Rams have get significantly better fuel economy while offering impressive towing capabilities.

Power and luxury aren’t the only variables when it comes to outfitting the Dodge Ram. In addition to choosing between the lighter two-wheel drive version of the Ram and the four-wheel drive edition, it is possible to specify whether the 1500, 2500 or 3500 trim is desired. This increases the overall weight of the vehicle and makes it more suited for heavy duty hauling or towing. An 8 foot bed or a shorter cargo area measuring just over 6 feet are also on the option list, and buyers can of course choose from a variety of towing and off road packages designed to customize the truck for its intended use.

The Dodge Ram received another major redesign for the 2009 model year, and the new truck has already made the rounds of the auto show circuit. Stylistically, the vehicles are quite similar, but power is up all around for the V-8 engines, especially when it comes to the base 4.7 liter. Fuel economy is also improved, but the V-10 and one of the current diesel offerings will no longer be on the table. Finally, the suspension system has been completely redesigned and replaced in order to focus on ride comfort and vehicle handling.

The 2009 Dodge Ram has several changes over the 2008 models. The Dodge Ram 1500 has been redesigned to add more comfort to the ride and to give it more overall power. The interior has been changed radically to provide better styling and comfort.

The exterior of the vehicle has been redesigned with a grille that is tilted forward for a much different look that provides better aerodynamics. The ride has been made smoother by rear suspension with coil-springs. The Hemi engine has more power in the ’09 models with 5.7 liter engines that get one more highway mile per gallon than the 2008 models.

The RamBox has added extra storage to the 2009 Ram. This storage addition has added two locking storage boxes in the fenders of the truck. These are large storage areas that are large enough, with 8.6 cubic feet of storage, to hold sporting equipment. Also new are two lock boxes in the floor of the cabs for still more storage.

For extra comfort, there are new materials that are used to make the interior surfaces softer. The interior is also larger than the previous model year. The MegaCab 1500 has been replaced in 2009 with a crew cab model, making the Ram options a regular, quad and crew cab sizes. There are new wheelbase sizes 120 inches and 140 inches. This gives the Ram in three sizes for its cargo beds: 8 ft., 6 ft. 4 in. and 5 ft. 7 in. The towing capacity of the Ram has been raised with 1,850 pounds for the 3.7 liter V6 engine with 4x2 and 9,100 pounds for the 5.7 liter V8 engine with 4x2.

The Ram 1500 has a diesel model available in 2009. The ’09 Rams come standard with electronic stability control and side airbags for safety. The trim varieties have remained the same with the Laramie, TRX4, Sport, ST and SLT.