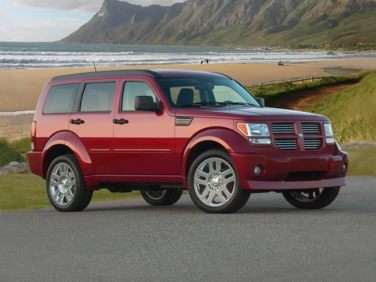 All About Dodge Nitro

Originally introduced in the 2007 model year, the Dodge Nitro is a four-door, five-passenger compact SUV. The Dodge Nitro is manufactured in Toledo, Ohio alongside the Jeep Liberty. Top competitor vehicles in the compact SUV vehicle class include the Nissan Xterra, Saturn VUE and Ford Escape. The success of the Jeep Liberty convinced Chrysler that the market for mid-size sport-utility vehicles should be explored further. Dodge did not have this type of vehicle in their lineup, and the chance to carve out new market share was appealing enough that the Dodge Nitro was introduced in 2007. Based on the Liberty platform, the Nitro was given the muscular Dodge styling that is characteristic of all of their models and positioned as a fun, lifestyle oriented vehicle.

The 2008 Nitro is largely a continuation of the previous year’s model. Buyers of the Nitro SXT or SLT are afforded a 210 horsepower, 3.7 liter V6, while the performance oriented R/T is equipped with a 4.0 liter V6 that makes 260 horsepower and 265 lb-ft of torque. The 3.7 liter can be mated with a 6-speed manual or 4-speed automatic transmission, but the R/T comes solely with Dodge’s 5-speed automatic. Both engines have nearly the same fuel economy numbers, with the larger V6 seeing 15 miles per gallon in stop and go traffic and 20 on the highway. This makes the R/T’s extra power an appealing option. Each version of the Nitro is available with all-wheel drive.

The entry-level Nitro SXT has a function-first interior, with cloth seats, air conditioning and power door locks and windows. The SLT adds upgraded seat fabric and improved driver’s aides such as auto-dimming mirrors and a vehicle information system. The SLT also provides Dodge’s ‘Load’n Go’ cargo management system which allows the rear of cargo floor to actually slide out from the vehicle and be loaded from either side. It also quickly stores the rear seats in the floor in order to maximize the amount of storage room available, adding a cargo-hauling dimension not often seen in a mid-size SUV. The top of the line R/T has a much sportier outward appearance with body-colored trim and a more aggressive aero package. A stiffer suspension also helps the Nitro R/T deal with the extra horsepower on tap.

The Nitro is not the best handling SUV in its class, and it suffers from a deadish feel in sharp turns combined with weak performance from the base V6. The R/T trim improves the power situation considerably, but the vehicle never throws passengers back in their seats – the throttle response merely goes from anemic to adequate. The Nitro is meant to be sold as a fun, weekend getaway SUV, but it is hard to recommend it based on fun factor alone with the low levels of performance it displays. That being said, the 4.0 V6 can still tow 5,000 lbs, which is enough to haul around a small boat or U-Haul trailer.

The Nitro’s rugged looks and excellent cargo capacity should put it on the shopping lists of those looking for a comfortable, reasonably economical sport-utility vehicle. However, in terms of driving excitement, there are better options in the same class. The Nitro R/T is a functional, reasonably powerful vehicle, but the lower trim models should be avoided if at all possible.

The ’09 Dodge Nitro models have received several updates to make the car more comfortable and to give owners a few small cosmetic items of use. The ’09 Nitro models all come standard with floor mats, unlike with previous models. They also come standard with a useful rear dome lamp and an auto unlock feature that allows anyone in the vehicle to exit more easily.

The ’09 models also come standard with automatic transmission. The suspension has been re-tuned for this model year because of complaints that were common for the ’08 models. The new suspension system provides better handling than in previous years. The muffler has also been retuned in vehicles that feature a 4.0 liter, V6 engine. A new option for the Nitro is a package for heavy-duty trailer towing.***** The ’09 models come in the SLT, SE and R/T models. The SXT has been replaced this year by the SE. The R/T model us a new trim style for the Nitro. It comes with a 4 liter, V6 engine standard as well as a 5-speed transmission with overdrive. The R/T trim comes with heated outside mirrors, extra moldings and later, 20-inch chrome wheels. The SLT, SE and R/T trims all come with either four-wheel drive or rear-wheel drive.

There are several new options for the ’09 Nitro models, including a power sunroof, larger wheels for the SLT and the SE models and chrome accents. One high-tech option in ’09 is the Mopar Uconnect wireless Internet system. To help with parking, the Parksense option helps with identifying obstructions in the rear.***** Many amenities were added to the SE models in response to complaints from ’08 owners. The 2009 SE comes with a 3.7 liter V6 engine and has Sirius satellite radio, power windows, 16-inch wheels, anti-lock brakes, power locks and a tilt steering wheel as standard.

The Nitro was discontinued after the 2012 model year.