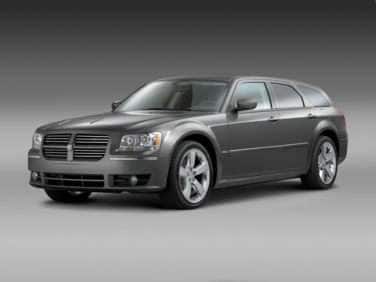 All About Dodge Magnum

When Chrysler merged with Daimler in 1998, they were able to benefit from technological exchanges with Mercedes that vastly improved their large car platforms. The LX platform was developed to create a series of rear-wheel drive, full-sized vehicles for the company. One of these cars was the 2005 Dodge Magnum, a large station wagon which was unique in its class – no other North American automaker had offered such a vehicle in their lineup for several years. The first station wagon for Dodge since 1991, the Magnum combined optional V8 power with an excellent chassis and good interior space.

For 2008, the Magnum is largely unchanged from the model which debuted a mere 3 years ago. With an exterior appearance that is very similar to the full-size Charger sedan, the Magnum tones down the menace and presents a strong, appealing style. The Magnum also follows the same trim levels as the Charger. The base SE is powered by 178 horsepower 2.7 liter V6, which does the job but doesn’t impart any excitement while motivating the somewhat heavy wagon. Stepping up to the SXT installs a 3.5 liter, 250 horsepower V6 that also generates 250 lb-ft of torque for improved throttle response and better highway legs. The rear drive SE and SXT are coupled with a 4-speed automatic transmission, while the all-wheel drive version of the SXT comes with a 5-speed auto.

For those who crave a wagon with more get up and go, Dodge offers two separate V8 engines in the Magnum. The R/T is outfitted with a 5.7 liter Hemi V8 that produces 340 horsepower, and thanks to cylinder-deactivation technology turns in fuel economy of 15 miles per gallon in the city and 23 miles per gallon out on the highway. The R/T can also be had with all-wheel drive. The ultimate in wagon performance can be found in the Magnum SRT8, which drops all pretense of grocery getting and earns its keep with a drag-strip friendly 425 horsepower, 6.1 liter Hemi V8. Both V8’s are exclusively sold with a 5-speed automatic transmission.

While the Magnum would not be considered luxurious, it is available with decent amount of standard equipment. Base models benefit from power door locks and windows along with cruise control. The SXT adds nicer wheels and optional dual-climate control, a better stereo system, and leather seats. The R/T and SRT8 provide the most comfortable interiors, with heated seats, a full range of electronic driver’s amenities and an optional performance package that provides a sport exhaust system and 20-inch wheels. Interior accents in the SRT8 are made of carbon fiber and leather for an upscale touch.

The Magnum’s cargo capacity is excellent, with a wide and low loading area leading into 133 cubic feat of storage space with the rear seats folded. While most people are most likely purchasing a Magnum in order to satisfy an adolescent muscle-car fantasy, the vehicle comes packaged with a respectable amount of utility no matter how many horsepower are found under the hood.

Unfortunately, due to poor sales, the Magnum saw its final year of production in 2008.