With the stampede of new crossovers and SUVs in the market, it would be easy to overlook the 2017 Dodge Journey. This midsize crossover has been with us in pretty much the same form for nine years now and counting. Developed and introduced in the chaotic times surrounding the bankruptcy of Chrysler and its subsequent link up with Fiat, the Journey is a survivor. And despite its shaky start in 2009, the Journey's constant upgrades and improvements have brought it to the point that it now outsells all other Dodge cars and SUVs.

The Journey’s enduring popularity may have something to do with its package size. Its footprint is just about right for many buyers, not too big or too small. Built on the bones of the now-discontinued Dodge Avenger front-drive sedan, the Journey manages to squeeze available all-wheel drive and an optional third-row seat in a package that’s about 8 inches shorter, 4 inches lower and nearly 1,000 pounds lighter than its Durango SUV showroom-mate. Dynamically, it feels more like a slightly raised station wagon than a hulking SUV.

And because the Journey development team had access to many of the same people who worked on the Dodge minivans, the Journey has a surprising amount of luggage and other cabin storage space for its size. Folding down all the seats creates an almost flat 67.6 cubic-foot expanse for toting sports equipment or large items. There is even a hidden storage compartment under the rear cargo floor. It doesn't offer a power-operated or hands-free liftgate, though.

Step inside the Journey, and you’ll land in a cabin that’s utterly conventional and no bigger than it needs to be. Dodge provides three big, easy-to-use dials for the standard dual-zone air conditioning system (Crossroad and GT get automatic climate control), simple analog speedometer and tachometer dials, and a straightforward console shifter for the standard automatic transmission.

The front seats are supportive and welcoming, done up in leather with sport mesh inserts in this tested Crossroad model. Most surfaces are soft-touch, and body contact points such as the door and console armrests are generously padded.

Chrysler’s Uconnect is one of the easiest-to-use infotainment systems around. Base models have a smallish 4.3-inch touchscreen, but pricier Journeys are available with the Uconnect 8.4-inch shown here. The system offers easy touch-key access to radio, music players, phone, and personal devices, vehicle settings, navigation, traffic and weather without the need to cycle through numerous menus and divert your eyes off the road. The display is also the monitor for the backup camera on Journeys equipped with that option.

When the Journey was being developed, it benefitted from packaging lessons learned creating the numerous nooks and crannies in Chrysler’s minivans. One such stash space available in some Journey models is under the front passenger seat bottom cushion. The Flip 'n Stow compartment is big enough to hide a laptop, tablet or purse, keeping valuables out of sight of prying eyes. Or it’s just a perfect place to store maps, CDs or important papers that you wouldn’t want clogging up the glove box or console bin. Also, the front passenger seatback can be folded flat, allowing long items such as ladders or 2x4s inside the vehicle with the liftgate closed.

But wait, there’s more. A pair of in-floor storage bins under the rear seat carpet is standard on all Journey models. They’re not big enough to store the Stow 'n Go second-row seats as they do on the Dodge Grand Caravan, but they’re plenty handy for carrying things like extra shoes, a first-aid kit or personal electronics.

General Motors reportedly used the Journey as a target for its product planners to match when it was exploring storage solutions for some of its own crossover vehicles.

Make no doubt about it, the Journey’s available third-row seat is just for kids old enough not to need a child seat and young enough to want to hike back there. Luckily, the second-row seat slides forward for easier access to the third row and can be adjusted forward to provide more legroom for its occupants. Also, keep in mind that when the third-row seat is up, there’s only 10.7 cubic feet of cargo space left back there — less space than in your average compact sedan.

One feature not found in many cars or crossovers today is a built-in booster seat. Optional on the Journey for the outboard second-row seat positions, the booster seat flips up easily with just one hand and gives kids a higher perch.

The cheap seats get to be a lot more fun with the Journey’s optional second-row entertainment system. Also included is a premium audio system with a subwoofer and 368-watt amplifier. The split overhead 9-inch screen comes with its own remote and wireless headphones.

The Journey is available with a workaday 173-hp 2.4-liter 4-cylinder mated to an ancient four-speed automatic transmission. EPA estimates are an unimpressive 19 mpg city and 25 mpg highway. The four-cylinder can keep up with traffic, but for a more rewarding driving experience — or if you want the security of all-wheel drive —opt for the 283-hp 3.6-liter V6.

The V6 is paired with a much more flexible six-speed automatic with the option of manual shift control. On front-drive V6 models, fuel economy drops by just a mile per gallon or two, and the confidence gained by having brisk freeway merging and highway passing ability is a big plus. The all-wheel drive system is an on-demand type, driving the rear wheels only when necessary to maintain traction or enhance dry-road handling.

Despite its sporty looks, the Journey’s performance envelope feels more like a minivan’s than a sport sedan’s — albeit in a far trimmer size that's easier to park and maneuver. Considering the Journey’s mission statement, that’s not a bad thing. An update a few years back gave the Journey decent sized brakes, and there’s plenty of grip from tire selections ranging all the way up to 225/55R19s.

Compared to the numb electrically boosted steering in some of today’s crossovers, the Journey’s old-school hydraulically boosted rack-and-pinion setup feels quite organic with natural self-centering and effort build-up in turns.

Bang for the Buck

Bang for the Buck

The 2017 Dodge Journey does not offer class-leading fuel economy or the latest semi-autonomous safety systems. What it does bring to the midsize crossover party is value for the dollar. It offers a lot of content for not a whole lot of money, as long as you don’t go crazy with option packages.

Couple that with an excellent Uconnect infotainment system, unique storage solutions and working-class good looks in a package no longer than a Honda Accord, and the Journey is worthy of your consideration. 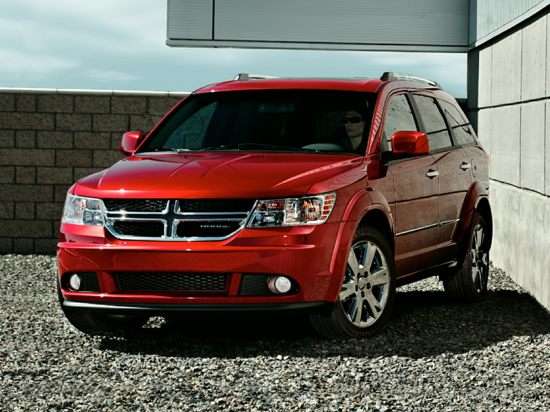