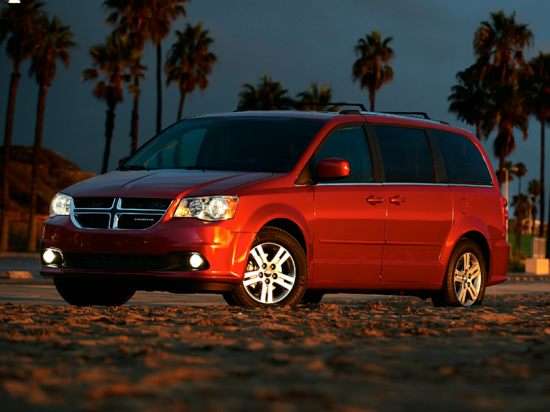 Changes for the 2014 Dodge Grand Caravan:

Dodge pares the 2014 Grand Caravan lineup down with the cancellation of the Crew trim level. A sporty Blacktop Package is available for the SE and SXT models, and these trim levels can also be equipped with a 30th Anniversary Edition option package commemorating 30 years of Dodge minivan production. The sport-tuned R/T models add automatic headlights and remote engine starting as standard equipment for 2014.

With the cancellation of the Crew model, the 2014 Dodge Grand Caravan lineup includes the American Value Package (AVP), the SE, the SXT, and the R/T.

The Grand Caravan SXT is equipped with power sliding side doors, a power rear liftgate, power second- and third-row windows (vent only in third row), and power adjustable pedals. A Super Center Console design is also standard, along with heated side mirrors.

The R/T model is the sporty version of the Grand Caravan, equipped with 17-inch aluminum wheels, revised suspension tuning, leather seats, an upgraded audio system, and a monochromatic exterior treatment.

According to the National Highway Traffic Safety Administration (NHTSA), the 2014 Grand Caravan receives a 4-star overall crash-test rating. The Insurance Institute for Highway Safety (IIHS) has not assessed the 2014 Grand Caravan’s crashworthiness as this overview is written, but in 2013 this model received a “Top Safety Pick.” Note, however, that the IIHS has not subjected the Grand Caravan to its new small overlap frontal-impact test.

All versions of the Grand Caravan are available with Uconnect Bluetooth connectivity, and except for the Grand Caravan AVP, all can be optioned with a reversing camera. A Safety Sphere Group is reserved for the SXT and R/T models, and contains rain-sensing wipers, parking sensors, a blind-spot information system, and Rear Cross-Path Detection technology.

A navigation system is also optional for the Grand Caravan SXT and R/T, and these models can be fitted with the touchscreen radio separately from a rear-seat entertainment system.