No, there's still no sign of a 2015 Dodge Durango Hellcat, but the Dodge brand's dynamic seven-seat crossover suv does build on its strengths for the new model year with more style and a further advance in entertainment features.

In the latter category, the 2015 Dodge Durango—already the only vehicle in its class with a dual-screen Blu-ray/DVD player—will add a premium 10-speaker "Beats by Dr. Dre" audio system that was specifically engineered for Dodge cabin environments with assistance from both the good doctor himself and Jimmy Iovine, the legendary music producer. The new setup will be standard on the 2015 Dodge Durango R/T and optional for the Citadel and Limited trim, albeit with late availability in all three. The Durango R/T also will showcase a red Nappa leather seating package later in the model year, inspired by a similarly eye-popping interior theme from the Dodge Challenger and Charger.

Additionally, two of last year's most popular appearance packages will be available across more of the Durango lineup during the 2015 model year: The V6-powered 2015 Dodge Durango Limited, for example, will join the similarly engined SXT version in offering a Rallye package, with the Blacktop bundle now coming to both the SXT and Limited as well as the R/T. More specifically, Rallye revisions include a monochromatic exterior that's complemented by 20-inch Hyper Black wheels, all-black cabins and a dual exhaust, while the Blacktop package provides Gloss Black exterior cues, including 20-inch wheels and cross-hair grille, along with an aggressive ground-effects kit.

Also available with the latest Chrysler Uconnect technology and safety measures such as blind-spot monitoring and rear cross-path detection, the 2015 Dodge Durango is priced from $30,395. 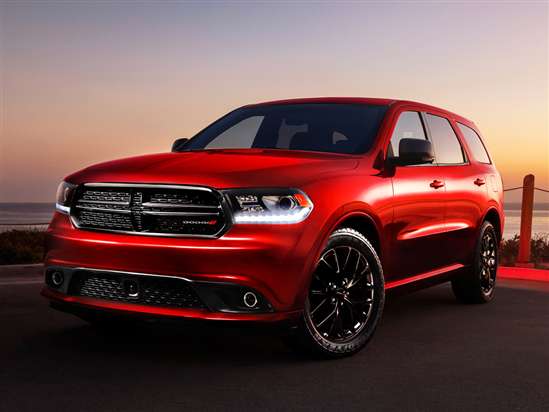