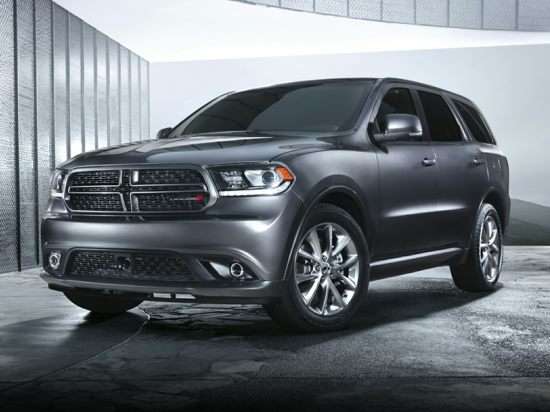 Changes for the 2014 Dodge Durango:

Dodge says the 2014 Durango competes in the full-size SUV category, which pits this 7-passenger SUV against vehicles like the Chevrolet Tahoe, Ford Expedition, GMC Yukon, Nissan Armada, and Toyota Sequoia. The 2014 Durango is sold in SXT, Rallye, Limited, R/T, and Citadel trim levels.

A new 8-speed automatic transmission with paddle shifters and a rotary shift dial is standard. It includes an Eco driving mode that is automatically engaged each time the Durango is started, but it can be manually shut off. The transmission delivers power to the Durango’s rear wheels, unless the optional all-wheel-drive system is specified. With the V-8 engine, the AWD system includes low range gearing and a Neutral position that allows the Durango to be flat-towed.

Because of the changes made to the 2014 Durango, last year’s National Highway Traffic Safety Administration (NHTSA) crash-test ratings don’t automatically apply to the newest version of the SUV. The NHTSA gives the Durango a 5-star side-impact crash-test rating and, for models with AWD, a 3-star rollover resistance rating.

The Insurance Institute for Highway Safety (IIHS) gives the Durango its highest rating of “Good” in all tests except the small overlap frontal impact assessment, for which the SUV has not been tested as this summary is written. The Front Crash Prevention rating is “Basic.”