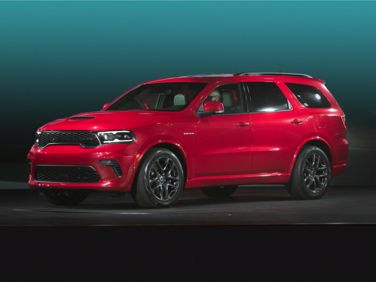 All About Dodge Durango

The Dodge Durango is a four-door mid-size sport-utility vehicle that can seat up to seven passengers. The Dodge Durango is manufactured in Newark, Del. alongside the Chrysler Aspen. The Dodge Durango first graced showroom floors in 1998 as Dodge’s only sport-utility vehicle in the lineup. As a mid-size SUV, the Durango mainly competed against the Ford Explorer and Toyota 4Runner although it was noticeably longer and more powerful. Originally based on the Dakota pickup platform, the 2004 Durango received a facelift and platform upgrade, which increased its size to the point where it was able to be competitive with the Chevrolet Suburban and Tahoe. In 2007, the exterior was again refreshed in order to streamline the somewhat clunky styling.

The 2008 Dodge Durango bears evidence of the external DNA it shares with the mid-size Dakota pickup. The imposing SUV has an appearance which well represents the considerable power and utility of the truck. The Durango can be ordered in SXT, SLT or Limited trim, with the Adventurer trim slotting in between the top two levels. The SXT comes with a long list of standard features such as air conditioning, power everything and off-road tires mounted on 17-inch wheels. The SLT upgrades interior materials, adds rear air conditioning and also installs a third row of seating to increase passenger capacity to seven. Optional on the SLT is a rearview camera which combines with a system Dodge calls ‘rear obstacle detection’ to take some of the stress out of reverse-parking this beast. 18-inch wheels also upgrade the vehicle’s exterior appearance.

The Adventurer trim level is designed to appeal to those who either take their SUV off-road, or at least want it to look like they do. An add-on to the SLT, the Adventurer adds a roof rack, downsizes the wheels to include off-road tires and also adds side steps and washable interior components to make it easier to recover from a long weekend of muddy action. The top of the line Limited trim provides luxury-oriented buyers with leather seats, dual-climate control, power-adjustable pedals and Chrysler’s MyGIG multimedia system. Much of the optional equipment on the lower trim models comes standard on the Limited.

While a 3.7 liter V6 engine is base equipment for the SXT, the optional 4.7 or 5.7 liter V8 engines make for a much more satisfying driving experience. The 4.7 liter provides decent fuel economy for a vehicle this size, and it can be run on E85 Flex Fuel. With a new, stronger frame underpinning the Durango, ordering the 5.7 liter HEMI V8 harnesses 335 horsepower to tow almost 8,000 lbs. This puts it near the same class as the full-size SUV’s that Dodge hopes to target. However, the smaller size of the truck imparts it with more pleasant driving dynamics than many of the plus-sized sport-utilities available from Ford and General Motors, and the reduced weight means that differences in fuel consumption for each of the available engines is negligible. While the Durango never feels like a sports car, it does provide an excellent sense of control once underway, especially when ordered with optional 4-wheel drive.

With 102 cubic feet of cargo space available with the rear seats fold down, the Durango is a clear winner when it comes to combining passenger capacity with cargo hauling and towing capability. For 2009, buyers will be given an extra incentive to park a Durango in their driveway when a hybrid version of the HEMI engine is installed in the SUV to improve fuel economy and emissions to 19 miles per gallon in the city and 20 miles per gallon on the highway. These numbers represent a significant reduction in the amount of fuel consumed during stop and go driving.

Dodge has added a hybrid model to the 2009 Dodge Durango lineup. The gas/electric HEV hybrid Durango combines the power of a V8 with the fuel efficiency of a V6. The hybrid Durangos can be run on either gas, electric power or both. They are equipped with a battery powered electric motor and a 5.7 liter V8 HEMI engine. The hybrid runs on “two mode” hybrid technology and features a detuned version of the HEMI. Both power sources are maximized by a transmission with variable gear ratios and two electric motors. The result is a 385 horsepower motor that needs no plugging in. All of the hybrids are equipped with a continuously variable automatic transmission. The HEV hybrid model averages about 20 miles per gallon which is only a five mile per gallon increase over the comparable regular V8 engine. The downside is that the price of the hybrid is higher than the regular V8 Durango with similar features.

The 5.7 liter HEMI V8 engine, available in the regular gas powered Durango, makes more power this year. And with the Multi-displacement system from Chrysler, there is no fuel-economy penalty. The V8 engines are paired with five speed transmissions while V6 models get a four-speed automatic. The other news for the 2009 Durango is the discontinuation of the Adventurer trim level and the renaming of the SXT to SE.

The available models are the SE, SLT, Limited and the HEV hybrid. With a choice of seating arrangements, the Durango can seat either seven or eight passengers. All models are nicely equipped with more than enough features for any driver’s needs, although the quality of the interior isn’t the best. The Limited model adds 20 inch chrome wheels, front and second row heated seats along with other luxury features. The SLT and Limited models are also available with Sirius Backseat T.V.