Many people say that we are in the midst of a revived muscle car era with cars like the Chevrolet Camaro, Ford Mustang and Dodge Challenger running the streets, but even when two of these cars were still concept vehicles and the other was an anemic sports coupe, the Dodge Charger showed up on the scene. Proving that horsepower trumps door count, the complaints of a four-door Charger quickly faded as the powerful sedan displayed its muscle. After spending a week behind the wheel of the 2010 Dodge Charger R/T, it was obvious that there really isn't much of a line between the everyday, family sedan characteristics of this car and the obnoxious muscle car abilities.

Assembled in Chrysler's Brampton Assembly Plant in Ontario, Canada alongside the Dodge Challenger and Chrysler 300, the Dodge Charger is available in three four trim levels for 2010 (SE, SXT, R/T and SRT8). While the lesser V-6 models go up against everyday family sedans, the Charger R/T competes against some of the sportier big sedans such as the Ford Taurus SHO and maybe even the Nissan Maxima. In base form, the 2010 Dodge Charger has a starting MSRP of $24,390, but additional performance upgrades including the powerful HEMI engine bump the Charger R/T starting price up to $31,370. This test vehicle was practically fully loaded and had a total price of $39,995 which is about on par with its competitors.

A redesigned Dodge Charger is expected later this year with styling cues reminiscent of the 1999 Dodge Charger Concept, but the current body still looks just as edgy and muscular as it did when it succeeded the Dodge Intrepid in 2006. The highlight of this body style is by far the broad, sculpted rear haunches and the upright front end with the scowling headlights which both help give the Charger its tough, muscle car attitude. The tall beltline finishes off the look of the Dodge Charger and is a signature element in the designs of this car along with its sister car, the Chrysler 300. The only major exterior styling changes that the Dodge Charger has had since its introduction are the redesigned taillights that now feature four small round indentations to mimic the quad taillight design of the 1968 Charger. The headlamps also feature a quadruple bulb layout in the sinister, blacked-out housings with the optional ($695) high-intensity discharge (HID) units for the low beams lights and halogen bulbs for the high beams. Fog lamps are standard on all non-SE trim levels.

As tested, this Charger R/T came with the optional ($4,665) Customer Preferred Package 29R that added to the car's interior and performance while giving it a much meaner exterior appearance. Except for the massive hood scoop, this upgraded body kit easily matches the more aggressive styling of the faster and more powerful Charger SRT8 with the 20-inch, five-spoke chrome clad aluminum wheels, the rear decklid spoiler and front fascia lower spoiler. Another part of this package is the Road/Track Performance Group which adds a unique black on black honeycomb grille along with a minor boost in performance. In some other colors, the Charger R/T could be considered a sleeper of sorts, but this particular test vehicle was decked out in Dodge's TorRed exterior color that was likely noticeable from miles away.

Dodge hasn't made many changes to the Charger's interior since a significant redesign in 2008 that brought some much-needed change to the cabin's styling and materials. While there are still plenty of hard plastic surfaces inside the Charger, the majority of the touch points now use softer and higher quality materials. The expensive Customer Preferred Package 29R added performance front bucket seats with embroidered 'R/T'? logo and all seats received contrasting red stitching and perforated suede inserts while the driver is further rewarded with soft leather on the steering wheel and shift lever. This package also includes a 368-watt, seven-speaker Boston Acoustic sound system that is further upgraded by the $900 Media Center Package that includes a GPS navigation, a 30-gigabyte hard drive, Uconnect Phone with voice command and Sirius Traffic and satellite radio. The Road/Track Performance Group adds sportier front seats giving the front occupants plenty of bolstering from the thighs up to the shoulders to keep the front passengers in place during hard cornering maneuvers.

The large size of the car means that there is plenty of room for three passengers in the rear seat, but the raised haunches that give the exterior of the car its unique look makes the rear passenger compartment slightly more confining. This is likely to be fixed as the design of the 2011 Charger is expected to do away with this design element in place of flatter but wider rear shoulders. Trunk space is also ample allowing for 16.2 cubic feet of storage, but the Charger's rear seat is also split 60/40 to fold down to accommodate longer, bulkier items.

Although the Charger is available with a pair of rental-fleet-friendly V-6 engines, the two V-8 choices are the way to go, and it the case of the R/T it's the 5.7-lier Hemi V-8 under the hood that produces 372 horsepower and 400 lb-ft of torque when equipped with the Road/Track Performance Group. This engine also has Chrysler's Multi-Displacement System (MDS) for cylinder deactivation. The transition from regular to fuel-saver mode is obvious, but they help give this powerful engine decent fuel economy with EPA estimates of 16 miles per gallon in the city and 25 mpg on the highway. All 2010 Chargers come with a five-speed automatic transmission that also features Auto Stick for manual shifting capabilities, and the R/T offers an enhanced version of Auto Stick for quicker manual shifts. The only powertrain option available for the R/T is the availability of all-wheel drive for additional $2,100, but this test model just came with the standard rear-wheel drive layout.

Despite a curb weight that tips that scales at just over 4,000 pounds, the Charger R/T is surprisingly quick and agile. The four-wheel independent suspension system features a short- and long-arm multi-link setup in the front of the car and a five-link setup in the rear to give all Charger models impressive handling abilities, but this R/T also adds performance-tuned suspension and steering for even better cornering maneuvers. Like any good performance car, the Charger R/T also has an upgraded four-wheel disc brake system that uses dual-piston calipers in the front and single-piston calipers in the rear. Finally, the Road/Track Performance Group adds a high-speed engine controller and a performance exhaust system for optimal performance. Although the Customer Preferred Package 29R adds almost $5,000 to the base price of the Charger R/T, it improves almost every performance aspect of this car while giving it a look and feel similar to the SRT8 which starts at about the same price as this fully loaded model.

While all of the other packages added plenty of styling and technology, one of the best packages equipped on this Charger R/T was the Super Track Pak for just $400. This package adds more aggressive 245/45ZR20 Goodyear Eagle F1 Super Car performance tires, front and rear self-leveling Nivomat shocks, thicker rear stabilizer bar, 3.06 rear axle ration and less-intrusive settings for the Electronic Stability Control (ESC).

The Dodge Charger has no problem showing off in acceleration and handling tests, but it also performed well in the important crash tests. The National Highway Traffic Safety Administration (NHTSA) gave the Charger five stars for frontal- and side-impact protection, but, interestingly enough, only four stars for rollover protection. As for the Insurance Institute for Highway Safety (IIHS) test results, the Dodge Charger received a Good rating for frontal-impact protection and Marginal ratings for side- and rear-impact protection. Standard safety features for the 2010 Charger R/T includes four airbags, ESC with brake assist, four-wheel anti-lock disc brake system, traction control and tire pressure monitoring system.

Although there are many options available for buyers looking at a full-size sedan, few have the styling and performance abilities of the 2010 Dodge Charger R/T. Even though the full-size Dodge Charger sedan has been around for almost five years, the final year of this design is still just as sporty as when it was introduced, but the true gem of this car is the powerful Hemi V-8. With an all-new design and more powerful engine options on the way later this year, the next-generation Dodge Charger only appears to be getting better. 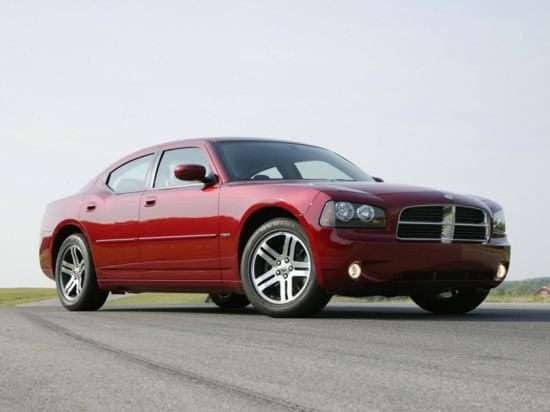