Who cares if it’s a four-door?

Introduction
By Ron Perry
All of the talk of whether or not Dodge discredited the Charger name by building the modern version of this legendary muscle car as a four-door is irrelevant. The 2006 Dodge Charger is rolling down the assembly line and it is a terrific sedan, so get over it. Already one of the nicest American cars to hit the streets in years, the new SRT-8 version dramatically enhances a great ride while validating the current Charger’s status as a true performance machine.Equipped with a 6.1-liter Hemi V8 motor that turns this stealth sedan into a monster of asphalt eating proportions, the 2006 Dodge Charger SRT-8 makes 425 horsepower and 420 lb.-ft. of torque, creating a car that few – if any – in its price range can match. At just $35,995 (including a $675 destination fee but not a stiff gas-guzzler penalty), the Charger SRT-8 is a bargain. But beware, because driving a Charger with an SRT-8 badge is like walking around with a chip on your shoulder and you can bet someone is always going to be trying to knock it off.

When the rumors of a four-door Charger were confirmed, the purists cried foul. Dodge didn’t stick to tradition and many denounced the Charger before it had the chance to prove itself. What made its way to the market is an aggressively styled sedan with the looks of a coupe and a powertrain that does America proud. The 2006 Dodge Charger SRT-8 is distinguished by integrated brake ducts, an air dam to reduce lift, and a functional hood scoop. A special SRT-8 designation badge is also set into a blacked out grille. At the rear the SRT-8 gets lower strakes to direct airflow, cut outs for dual exhausts and a spoiler.

Under the hood is where the 2006 Dodge Charger SRT-8 shines. The 6.1-liter, Hemi V8 delivers a stunning 425 horsepower and 420 lb.-ft. of torque. The Hemi is a throwback to the late 1960s when the Charger roamed the streets willing and capable of accepting all challengers (no pun intended). The modern day Hemi engine is capable of launching the Charger SRT-8 from 0-60 in a tick over five seconds and can transform a perfectly good set of tires into a cloud of smoke you can watch disappear in the wind. When it comes to power, Dodge has kept the Charger heritage alive.

The 2006 Dodge Charger SRT-8’s interior gets upgraded as well. All leather seating is distinguished by contrasting red stitching and suede inserts that keep you firmly planted during tight cornering. The power-adjustable front seat headrests get an embroidered SRT-8 designation and faux aluminum trim accents the interior. Interior color choices are limited to Dark Slate Gray with Light Slate Gray inserts and red stitching.

There are three option packages for the 2006 Dodge Charger SRT-8. Package 1 includes heated front seats, dual-zone air conditioning with a filtration system, automatic headlamps, and one-touch window switches for $675. Package 2 includes a security system, and an eleven speaker premium audio system with a six-disc CD changer and MP3 capability for an additional $1,245. Pony up $2,550 and you get a DVD-based navigation system, Sirius satellite radio and a hands-free communication system including Bluetooth technology. A power sunroof is also available as a separate option at a cost of $950.

Dodge didn’t incorporate a bunch of phony vents and scoops into the design of the 2006 Charger SRT-8. Each scoop or vent is functional and contributes to the performance of the SRT-8. The aggressive front ducts deliver cooling to the front brakes while the hood scoop pulls cool air into the engine bay. The rear wing provides increased downforce at high speed, which the Charger SRT-8 is capable of achieving.

With all of the power the 6.1-liter Hemi delivers, a great braking system is needed to keep things under control. The 2006 Dodge Charger SRT-8 delivers here too. The SRT-8 is equipped with Brembo four-piston calipers utilizing 14.2-inch vented discs up front and 13.8-inch vented discs at the rear. The SRT-8 is also equipped with ABS, brake assist, and stability control as standard equipment. The braking system stops the Charger SRT-8 from 60 mph in approximately 110 feet.

The 2006 Dodge Charger SRT-8 has a 16.2 cubic foot trunk that can accommodate most daily needs including trips to the grocery store, a set of golf clubs or the kids’ athletic supplies.

The 2006 Dodge Charger SRT-8 comes with only one transmission option, a five-speed automatic – ahh, yet another disappointment for the Charger purists. Though the automatic can be driven as a manual thanks to its AutoStick feature, it is not the same as shifting the gates of a traditional manual transmission. Outside of tradition, the five-speed transmission delivers smooth, precise shifts.

Think of the 2006 Dodge Charger SRT-8 as a sports car capable of seating five. The SRT-8’s interior is more practical as a four-door than a two-door, accommodating up to five people. Front seat occupants get power adjustable, heated and well-bolstered front seats. Rear passengers are rewarded with sufficient leg and headroom. All seating is leather with suede leather inserts. Only one color choice is available on the SRT-8 model, Dark Slate Gray with Light Slate Gray inserts and contrasting red stitching.

Those that opt for the Hemi-powered 2006 Dodge Charger SRT-8 get additional badges to separate their car from the others. The SRT-8 sports a unique heritage-inspired badge set into the blacked-out grille.

The price of a Hemi doesn’t come cheap on the upfront purchase price and the back-end gas consumption. The 2006 Dodge Charger SRT-8 is rated at 14 city and 20 highway with a combined average of 16 mpg. But considering the temptation facing the Charger SRT-8’s driver at every stoplight, and the fact that EPA data is optimistic, you’ll be lucky to see a 15 mpg average. 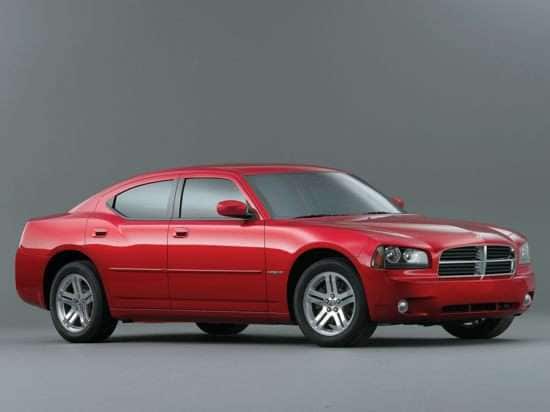