Special edition Challengers don’t get much more special than the 2015 Dodge Challenger Hellcat, but the Dodge brand’s modern-day muscle car actually has a long list of exclusive models to its credit, including the top 10 choices selected here. A highlight of many, of course, is HEMI power, and Dodge designers haven’t been shy about reinforcing the car’s retro roots, right down to the reintroduction of classic colors and shaker hoods. Additionally, Mopar, the aftermarket branch of Fiat-Chrysler Automobiles, has played its part, tuning up a pair of particularly hot choices during the past six years.

As a result, the tale of the tape here shows this Challenger with some serious advantages over its better-selling rivals, as evidenced by its position as the quickest, most powerful muscle car ever sold to the general public.

Headlining the return of the Dodge Challenger to U.S. streets in 2009, the R/T Classic was the first of the special edition Challengers and set the tone for those that followed. In other words, it combines throwback design cues with thrilling dynamics, complete with a 5.7-liter HEMI V8 that could pour out 376 hp and 410 lb.-ft. of torque, while propelling the car from 0-60 in fewer than 6 seconds.

A “pistol-grip” shifter helps drivers handle that output and is hooked to either a six-speed manual or five-speed Auto Stick automatic transmission, with that and other interior upgrades complemented by vintage-style side stripes, both “Challenger” and “R/T” badging, huge 20-inch polished-chrome wheels with a heritage-inspired design, a chromed fuel-filler door, and three paint hues from the past, including HEMI Orange, TorRed and B5 Blue.

The Chrysler Group’s SRT team wasted no time in whipping up a high-performance coupe of its own for 2010, bringing hallmark Street and Racing Technology to the second of the limited-edition Challengers on our list today: the 2009 Dodge Challenger SRT8 Plum Crazy model, in which purple reigns indeed. That’s because the car is covered in a Plum Crazy Pearlcoat from back in the “Dodge car paint-code archive,” and then packs a 6.1-liter HEMI V8 engine.

It’s a plum choice, too, producing the kind of output that drivers would come to expect from future Challenger SRT editions. More specifically, that would be 425 horsepower and 420 lb.-ft. of torque, enough to enable 0-60 runs of 4.9 seconds. But SRT engineers also baked in serious suspension and braking capabilities, backed by enough stopping power to go from 0 to 100 mph to 0 again in under 17 seconds.

The 2010 model year also saw another one of the Dodge Challenger special editions show up with an upgraded exterior finish, as the brand decided to celebrate four decades of muscle-car production—dating back to the debut of the original Challenger in 1970—by launching a limited run of Furious Fuchsia versions.

The striking exterior finish was offered on both the Challenger R/T Classic and SRT8, with each configuration combining that color with its own specific enhancements. The R/T Classic Furious Fuchsia, for example, featured its trademark body-side striping, as well as its recognizable “Challenger” and “R/T” badging, and further was furnished with Furious Fuchsia accent stitching in its premium cabin.

The SRT8 Furious Fuchsia cars, limited to a mere 400 units, brought out HEMI motivation and matched that with style cues like leather, Pearl White performance seats that were brand new for 2010 and accented by special Furious Fuchsia stripes.

The Mopar brand is better known for providing hi-po aftermarket goodies for various Chrysler Group products, but for 2010, the team got in on the action from the other side of the ledger, in the form of the “Mopar 10.” The first of two Mopar Challengers sold by Dodge dealers—the other premiered in 2014—this initial entry goes the full Mopar monte with enhancements inside and out, and under the hood, too.

Among them were HEMI helpers that included an exclusive engine cover, a cold-air intake, and a hood-venting system with a hood held down by vintage-style pins. And on the topic of style, the Mopar 10 stands out from the crowd with a wide-range of retro cues, consisting of gloss-black 20-inch wheels, Mopar shifter handles and more.

Emphasizing the notable nature of the Mopar 10 were the “owner kits” that accompanied every car, bringing items like a signed, limited-edition sketch of the car and a commemorative book.

By 2011, it was time for Dodge to up the ante in terms of output, and engineers bet on a brand-new HEMI engine that would radically raise the performance limits in future SRT Challengers. In fact, harkening back to the era of “no replacement for displacement,” the 2011 Dodge Challenger SRT8 392 showcased its cubic inches in an array of logos and badging, but, more importantly, also made the most of the 392 cubes beneath the hood.

There, a 392-cubic-inch HEMI V8 leveraged about .3 extra liters of displacement—versus the 2010 HEMI range topper—to unleash an extra 45 horses and 75 lb.-ft. of torque; the bottom line here: 470 hp and an equal number of lb.-ft. of twist. That powerplant also introduced Dodge’s cylinder-deactivation technology to the Challenger SRT8, allowing it to return up to 23 mpg.

Production of the Inaugural Edition of the car was limited to 1,000 units for U.S. dealers (and 392 for Canada).

One of the earliest Challenger concept cars also spawned a modern-day production variant, as the 1970 Yellow Jacket eventually led to the 2012 Dodge Challenger SRT8 392 Yellow Jacket.

As its name gives away, the newer car was kitted out with the newest, most powerful HEMI then available, along with an updated graphics package that included a strong dose of Stinger Yellow. As a case in point, the exterior of the Challenger Yellow Jacket was done primarily in that eye-catching hue, with a modernized “Yellow Jacket” logo poised on the rear fender and set off by a black grille, black body-side striping and five-spoke cast-aluminum wheels with black-painted pockets.

Stinger Yellow accents the cabin, with some visual help from silver accent stitching, and this Challenger also challenges the notion of what a premium muscle car can offer, courtesy of lux features like an 18-speaker, 900-watt Harman Kardon sound system and two-mode adaptive damping.

Blacked-out style cues were in the spotlight with the 2013 Dodge Challenger R/T Blacktop, one of a handful of brand entries to offer a dark-edged design package for that model year. Chosen for the Challenger were:

Yet the Blacktop benefits extend well beyond the car’s looks. Engineers also have deployed a three-mode electronic stability control setup (with full “off” mode) and all of the go-fast goodies of the 2012 Super Track Pack, providing noticeable improvements in stopping, steering and handling.

Naturally outfitted with a HEMI engine, the Challenger Blacktop could be ordered in an “R/T Plus” trim, too, to deliver upscale amenities ranging from Boston Acoustics audio to premium Nappa leather seating.

Building on the success of the first of the Mopar Challengers, the 2014 edition raised the Mopar bar even higher: Like its predecessor, it’s accented with aftermarket-style upgrades, but now there are even more available, including a functional “shaker” hood and the ability to handle any of the three “Scat Pack” power-ups that premiered in 2014. Those packages provide three levels of improved performance for the 5.7-liter HEMI, with the most powerful boosting output by 58 hp and 47 lb.-ft. of torque—and topping out with roughly 433 of the former and 447 of the latter.

Dodge also made sure the Mopar 14 entry would be just as collectible as the edition from 2010, freshening up the appearance with Mopar style cues, capping the production run at 100 cars and including a personalized owner’s kit with each one.

The automotive enterprise started up by the Dodge brothers—Horace Elgin and John Francis—celebrated its first century last year, so what better way was there to mark the occasion than with the latest in a long line of anniversary edition Challengers.

Unsurprisingly, the 100th Anniversary Challengers weren’t shy about their age, boldly boasting die-cast “Dodge Est. 1914” badges to go with a rich selection of exterior finishes and a major cabin upgrade. In the mix here are a model-specific racing-style steering wheel and two new Nappa leather themes—Molten Red and Foundry Black—that come with a custom-look cloud-overprint design for the car’s sport seats and armrests, as well as with complementary industry-look accents.

It’s also worth remembering that other 100th Anniversary enhancements for the Challenger included plenty of cutting-edge infotainment, from a Beats with Dr. Dre sound system to a Uconnect setup with 8.4-inch touchscreen.

With 6.2 liters of supercharged HEMI chained to the engine bay, the 2015 Dodge Challenger Hellcat doesn’t just lead our list of limited edition Challengers. It also out-muscles every other production muscle-car ever sold, serving up a steep 707 hp and 650 lb.-ft. of torque. That output, in turn, enables a top speed that’s just shy of 200 mph, a quarter-mile time of 10.8 seconds, and EPA ratings that still reach up to 22 mpg highway, and it’s supplemented by Hellcat-specific brake, steering and handling systems, along with an aero body kit that’s also engineered for optimum cooling functionality.

Needless to say, the Hellcat models have been as hot as Hades since their debut, too, forcing the brand to increase production in a bid to keep Challenger fans satisfied. 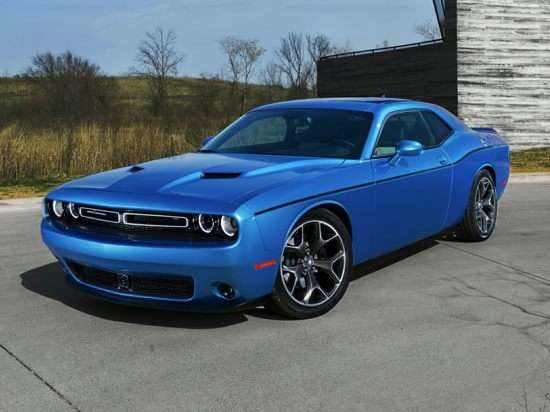