Good things come to those who wait

When we first drove the 2008 Dodge Challenger SRT8 in March, we came away very impressed. In fact, we had very few complaints, most of them having to do with the five-speed automatic transmission that was standard with the car, and its unwillingness to hold a gear, despite having a manual shift function.

Well, you know what they say about the squeaky wheel getting the grease: Behold, the 2009 Dodge Challenger SRT8.

For 2009, Dodge has added something called the Track Pak to the options list of the Challenger SRT8 (and the V-8 powered R/T for that matter). This adds two important features. The first is a limited-slip differential, always nice to have in your muscle car. The second is the one worth crowing about: A six-speed manual transmission. Ripped from the Dodge Viper along with its dual clutch, this transforms the Challenger SRT8. If it was lively before, now it's downright exuberant. Best of all, the rest of the Challenger  SRT8 remains the same powerful, fun, good looking, good handling machine that we drove earlier. We said it then, and we say it now: Chevrolet's forthcoming Camaro SS is going to have to be very good to top the Challenger SRT8.

The 2009 Dodge Challenger SRT8 sits at the top of the Challenger pile, above the V-6 powered Challenger SE and the Challenger R/T with its smaller V-8 engine. There's no variable displacement cylinder deactivation technology here; if you can't handle 13 mpg city, then get another car. There aren't any changes to the Challenger's 425 hp Hemi V-8 engine this year, and that's just fine with us. When an engine turns hydrocarbons into horsepower as well as this one does, we see little reason to tamper with the formula, and apparently, Dodge agrees.

No, the real Challenger news is in the transmission tunnel, where you can finally ditch the five-speed automatic for a real six-speed manual. Available as part of the $695 Track Pak, it's borrowed from the Viper, including the dual-clutch mechanism, albeit with different gear ratios. It even has a feature called "hill start assist," which holds the car on a steep hill from a dead stop, giving the driver a little extra time to get going before rolling backward in traffic. Our advice: Get this transmission. The automatic is fine, but its tendency to upshift even when in manual mode irritates us to no end. The stick shifts smoothly, has a great pistol grip that fits perfectly in your palm, and the clutch is progressive and easy. If you plan on using your Challenger as a burnout machine – and really, who isn't – the stick is the natural choice.

The "SRT" in Dodge Challenger SRT8 stand for Street and Racing Technology. The SRT badge implies that the car it's stuck to will be equally adept on the track as it is on the street.

Surprisingly, it really works out that way.

Our test route through New Jersey took us to Englishtown raceway, but not to the obvious drag strip. Instead, we were shown to the short road course. Although not exactly suited to a car of the Challenger SRT8's horsepower, it was more than adequate for us to stretch the car's legs and allow us to see how the car worked as a whole.

The suspension does an admirable job of holding the Challenger SRT8's bulk in check. No car weighing 4,100 lbs. is going to be described as "nimble," but the big Challenger comes close. Blast down the straight, stand on the brakes – heavy-duty Brembo brakes on this version – and bend it in. If you let the traction control do its thing, it'll slow you down, but shut it off for a graceful power slide that is easily controllable as long as you're not too crazy on the throttle. The Challenger SRT8 is clearly more in its element on a faster track, but even on this one – which one engineer likened to an autocross course – it was easy to see how much better at track duty the SRT8 was than its R/T brother.

Out in the real world, it's surprising that the Challenger SRT8 doesn't beat you up. We've been impressed with this ride and handling compromise since we first slid behind the wheel, and continue to be so: you feel the bumps in this car more than any other Challenger, but it rarely is annoying, and the Challenger SRT8 is a car you could easily live with every day.

While all three versions of the Dodge Challenger share their exterior styling, the SRT8 has a few notable differences. The rear spoiler, for example is flat black; the Challenger R/T's is body color, and the Challenger SE doesn't even have one. The chin spoiler in front is deeper, and the various badges on the exterior let it be known that this is an SRT8 or 6.1-liter Hemi. Then there's the hood stripe; patterned after carbon fiber, it accents the hood bulge nicely.

There's even less difference inside the Challenger. The SRT8 gets unique seats, and standard leather upholstery. The seats are awesome, wide and comfortable, but with plenty of grip for hard cornering. The dash also sports a standard performance computer, with settings for acceleration times, cornering and braking loads, and other fun things. As if driving the Challenger SRT8 fast wasn't entertainment enough.

Like the rest of the Dodge Challenger lineup, we were impressed by the quality of the interior fittings and their assembly. The Challenger SRT8 shares the same cabin trim as its lesser brethren, but this is one of those rare cases of the low-priced cars getting the high-priced interior: The dash is soft-touch, as are the door tops, and there are nice feeling surfaces on most areas of the cabin. It's still not a particularly exciting design, but the functionality of it can't be questioned. It's also supremely quiet inside. While the Challenger SRT8 definitely introduces more noise into the cabin, it's still pretty quiet on the highway. Besides, if you're going to whine about engine noise 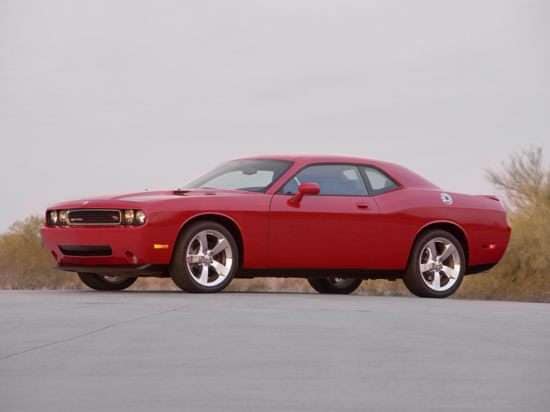