The muscle car for grownups

What's New – The 2008 Dodge Challenger SRT8 is the reincarnation of the brand's classic 1970s muscle car. Blessed with modern underpinnings, sexy style and 425 horsepower, it's poised to rock the socks off Mustangs and the new Chevrolet Camaro before it even debuts.

Why It Matters – This may be the last gasp for big V-8-powered cars like this, but oh, what a gasp it is. With modern handling, a secure chassis and plenty of power, the Challenger will let boomers and Gen Xers alike relive the pleasures of the 70s musclecar wars, but without the pain. 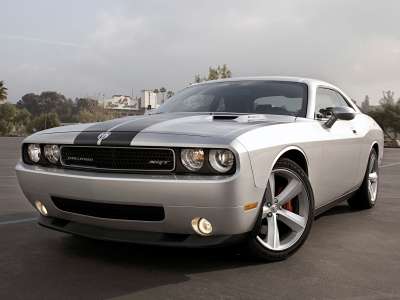 Dodge Challenger SRT8 – 2008 First Drive: Memory is a tricky thing. Over time, it fades and softens, and we as a species tend to forget the pain and remember the pleasure of life's experiences. It's like the childhood memory of your first baseball game: You remember the winning home run, waving your team's flag, maybe even catching a fly ball if you were lucky, but forget the nausea from too many ballpark hot dogs, not to mention the flaming sunburn.

It's with this same misty-eyed nostalgia that many look back to the 70s, and the end of the last great muscle car era. There were great cars then, to be sure, with names and shapes that endure today, and the fondness for this bygone era has driven the prices of these classic cars into high six digits in some cases. This despite the fact that, even by the standards of the day, the cars were often primitive to drive in anything but a straight line.

Regardless, the current Mustang's retro styling is based heavily on its early incarnation and sells strongly. Rivals Chevy and Dodge have taken notice, with Chevrolet bringing back a retro-styled Camaro and Dodge reintroducing the Challenger.

We won't see that Chevy for another few months, but the Challenger is here now, and we have driven it. Our conclusion after a day of driving on the highway, the mountains and even Willow Springs Raceway in Rosamond, California: Dodge nailed it. The car has the look and personality of the classic, but the pain is gone. The bumpy ride is now smooth, the raucous interior is silent, and frankly, the ungainly proportions of the original are tidy and modern. Plus, there's 425 horsepower on tap in the SRT8, a modern independent suspension derived from Mercedes-Benz parts, a comfortable and spacious interior, and handling that even race versions of that old Challenger would have been hard pressed to duplicate. The original muscle car fans are now grown ups, and with the Challenger, so is the muscle car itself.

Despite the styling inside and out, a lot about the Challenger is already a known quantity. This is because the car is based on Chrysler's "LX" platform, which also underpins the Dodge Charger and Magnum and the Chrysler 300. That means a lot of the same features are available in this car as in those, such as the SRT8's 425-horsepower 6.1-liter V-8 engine and five-speed automatic, the independent suspension, and goodies like the performance computer that tracks acceleration, braking distances, and lateral acceleration. 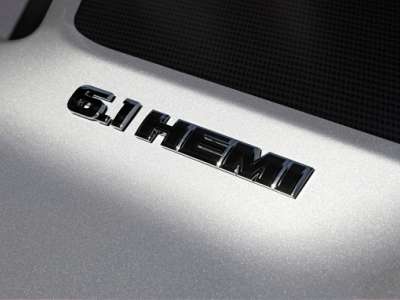 For 2008, only one Dodge Challenger model is available: the big-engine SRT8, with a base price of $37,995 including a $675 destination charge. This includes almost everything: The Hemi V-8 and the rest of the performance hardware, enhanced seating, SRT8-specific gauges and all the exterior badges needed to distinguish this car from its soon-to-come lesser brethren. The three options don't increase the bottom line much, either. The three-season tire package adds only $50, the sun roof is $950, and the MyGIG system brings a very reasonable $890 to the price tag. Fully loaded, a 2008 Dodge Challenger SRT8 will sticker for $39,885. Finding a dealer to sell you one at that price will be a challenge itself, since this hotly sought-after car is already mostly sold out of its initial 6,400-unit run. 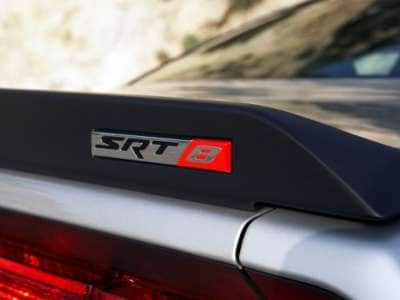 Don't fret though. A 2009 Challenger is in the pipeline, with a broader model range – including a V-6 powered SE and 5.7-liter V-8 R/T – and a six-speed manual available for the SRT8. Prices for those models haven't yet been announced.

When you're talking about a muscle car, what better place to start than under the hood? Pop the fiberglass one on the SRT8 and you're greeted with a sight any fan of things fast, young or old, would appreciate. The Chrysler corporate Hemi V-8 may not be a high-tech overhead-cam songbird, but it has it where it counts: 6.1-liters of displacement cranking out 425 horsepower and 420 lb.-ft. of torque. It's connected to a five-speed automatic transmission with manual shift control, sending all that to the rear wheels. This drivetrain is familiar to anybody who is a fan of modern Mopar performance, as it's the same engine found in the Dodge Charger and Magnum SRT8 models as well as the Chrysler 300C SRT8. 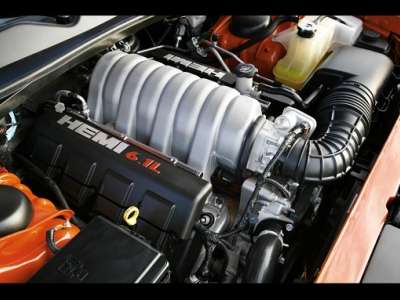 The same goes for the suspension. A multilink independent setup in the front and rear, the underpinnings are actually sourced from the previous-generation Mercedes-Benz E-Class sedan, a legacy of Chrysler's recently terminated relationship with Daimler-Benz. On SRT8 models, the suspension is tuned primarily for performance, but still offers a comfortable ride.

To haul the Challenger SRT8's 4,140 pounds to a halt, Dodge has incorporated huge brakes from Brembo. The front rotors boast a 14.2-inch diameter, and are gripped by four-piston fixed calipers. The rears are bigger than many cars' fronts: 13.8 inches and also grabbed by four-piston fixed calipers. Anti-lock control is standard, as is stability and traction control; note that both of the latter can be shut off entirely. 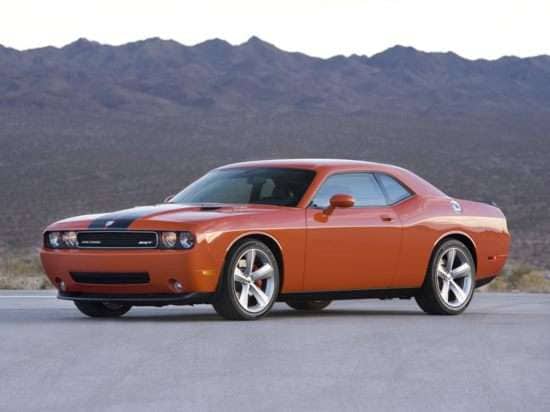