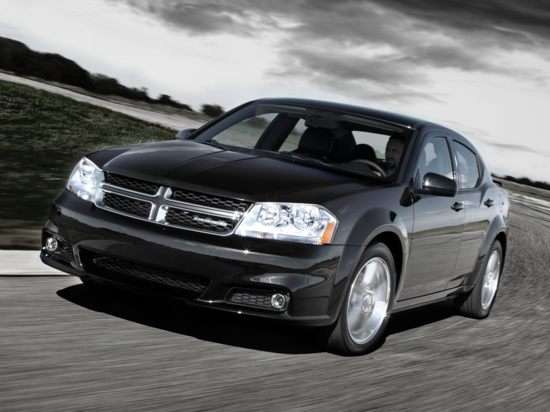 Changes for the 2013 Dodge Avenger:

Now, the 2013 Dodge Avenger SE can be ordered with either a 4-cylinder or V6 engine, but the brand considers the V6 version to be a different trim level, and the latter choice does bring additional standard goodies like a body-color rear spoiler, aluminum wheels, and bright-tipped dual exhaust.

More of a difference can be found by moving up to the 2013 Dodge Avenger SXT, which expands on the SE models with power-adjustable body-color outside mirrors and premium illumination features that include aimable front and rear LED lamp as well as automatic on/off projector headlamps. Inside, the upgrades run to an eight-way power-adjustable driver’s seat, a six-speaker sound system, a leather-wrapped steering wheel and shift knob, automatic temperature control, a tire-pressure display, an Electronic Vehicle Information Center, and Dodge’s Tip Start system (that doesn't require the driver to turn the key to start the car).

The 2013 Dodge Avenger R/T harkens back to the brand’s classic R/T entries of the past, with a model-specific sport-tuned suspension matched to unique design details inside and out. The exclusive cockpit, for example, includes Z-stripe cloth seats with leather-trimmed performance bolsters and a heated front row, a steering wheel wrapped in perforated leather, and special R/T stitching, badges and other graphics. Naturally, there’s also a high-performance audio system on board. The exterior of the 2013 Dodge Avenger R/T takes a similarly athletic tack, thanks to a body-color R/T grille, front quarter-panel stripes, 18-inch polished aluminum wheels, a rear spoiler, R/T logos and badging, and black-bezel headlamps.

The brand’s aggressive Rallye and Blacktop appearance upgrades are offered on all models of the 2013 Dodge Avenger as well, as are a powered sunroof and popular nav and infotainment features.

Standard motivation in the 2013 Dodge Avenger SE and SXT comes from a 2.4-liter 4-cylinder engine with variable valve timing and sequential multiport injection, with the SE model relying on a four-speed automatic transmission and the SXT adding two more gears and AutoStick manual-shifting functionality. The much-lauded 3.6-liter Pentastar V6 is available on both those models, and also is the standard choice in the 2013 Dodge Avenger R/T. The engine makes 283 horses and 260 lb.-ft. of torque, and is mated solely to the six-speed AutoStick.

After receiving 4-star grades for front-, side- and rollover-crash protection from the National Highway Traffic Safety Administration, NHTSA unsurprisingly awarded the 2013 Dodge Avenger a 4-star overall grade, too. On the other hand, the Insurance Institute for Highway Safety (IIHS) recognized the 2013 Dodge Avenger for its enhanced Top Safety Pick+ rating, which requires passing safety tests in side-, front- and rear-impact scenarios, along with the Institute’s new small-overlap front-impact test.

The 2013 Dodge Avenger can be equipped with a Uconnect 730N infotainment and connectivity system, featuring voice control, a 6.5-inch color touchscreen, remote USB port, Bluetooth audio streaming, and a full-function navigation system enhanced by a one-year complimentary subscription to Sirius Travel Link. Providing an added advantage for audiophiles, that setup is further enhanced by a 276-watt Boston Acoustic sound system.