With Hyundai and Kia moving their vehicles up-market, there’s an opportunity for other brands to play the affordability card, and it looks like Dodge just may be trying to fill that role. Looking to bring more value to the mid-size sedan segment, Dodge is launching the 2012 Dodge Avenger SE V-6 trim level at a starting price of $21,495.

First off, the new Avenger SE V6 brings the Pentastar 3.6-liter V-6 engine to the table which is good for a best-in-class 283 hp, and with its six-speed automatic transmission, it also delivers 29 mpg on the highway - an unbeatable mark for the segment. The Avenger SE V-6 then adds a fairly robust list of standard equipment, including an interior kitted out with soft-touch materials, premium cloth seats, 18-inch aluminum wheels, a rear spoiler, LED taillamps, a bright-tipped dual-exhaust system, a tilt/telescoping steering-wheel with integrated audio and cruise controls, remote keyless entry, power windows/door locks, a fold-flat front-passenger seat, and air conditioning, along with plenty of safety equipment. Clearly then, this isn’t an example of a brand cutting prices merely by cutting content.

In the mid-size segment, the Nissan Altima was the No. 2 best seller in February, trailing the Camry by 1,589 units, and it’s also the least expensive non-South Korean mainstream competitor in its segment. Dodge hopes that the Avenger SE V-6 will own the upper hand in the MSRP department when it comes to its six-cylinder competition. Consider how the Dodge fits in among the starter V-6 models from some other brands:

And while Hyundai doesn’t offer a V-6 entry, the comparable Hyundai Sonata 2.0T—with a turbocharged 2.0-liter I-4—starts at $24,745. Also, it’s likely the Avenger’s advantage against the Fusion and Malibu will increase even further when the all-new versions of those models come to market later this year. One more notable factoid about Avenger pricing: Its MSRP is $460 lower than the base model Camry with a four-cylinder engine.

For the final word on the 2012 Dodge Avenger SE V-6, let’s go to Reid Bigland, president and CEO of the Dodge Brand, who wrapped things up by saying that: “The Dodge Avenger is one of the fastest growing mid-size cars in America, with sales up 112 percent this year. We’re building off this momentum with the introduction of the new SE V6 package, delivering a true no-compromise solution for the mid-size car buyer—283 best-in-class horsepower, 29 mpg highway, 18-inch wheels and a rear spoiler—all for just $21,495 MSRP. You get the power, the efficiency, the look and tremendous value that is unmatched in the segment.” 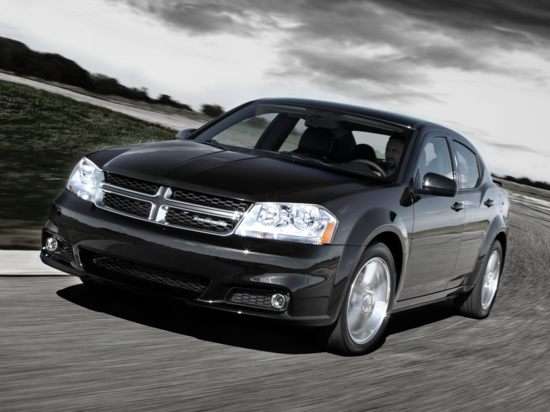