Pictures really don’t do the 2013 Chevy Spark ultra-compact hatchback any justice as in most shots that car looks like it could easily be swallowed whole by a passing Cadillac Escalade. But once you see it up close and take in the aggressive swoop of the headlamps, its ultra-cute booty as well as the tall and chunky visage of the airy glass greenhouse, we think you will see this as a much more grown up car and not the spiritual successor to the old Geo Metro.

Due to the Spark’s impressively grown-up overall feel, not only did we think Chevy was expecting buyers to cross shop the wrong competing models but we also were sure that it was going to sell strongly in this country in spite of its small overall size. You see, if you are just going by strict numerical measurements then the 2013 Chevy Spark competes with three of the least fun to drive cars on the market today—the Smart ForTwo, a base model Fiat 500 and the Scion iQ.

To be honest, there’s a better chance of Paris Hilton winning a national spelling bee than there is for any of those models to in any way beat the Spark for overall practicality and affordability. Perhaps that is why it is selling much quicker than Chevy initially anticipated in these first few months that it has been on sale here.

Now, some may say the2013 Kia Rio hatch belongs in a different size class because it offers 49.8 cubic feet of storage space with the back seats folded as opposed to the shorter Spark which only manages 31.2 cubic feet. Still, both of those cargo space readings should make either the Rio or Spark suitable for moving a single friend’s apartment quite easily.

Sure, the Rio is a bit bigger on the outside but inside the cabin, the Kia can feel quite cramped due to less than ample head and elbow room for the front driver and passenger.  Now, we happen to think that both the 2013 Chevy Spark and 2013 Kia Rio 5-door with its pug-like front end are cuter than the Youtube rapping sensation PSY when he displays his infectiously silly dance moves in his video for “Gangham Style.”

So, despite the Rio’s puppy-like appearance, how did it manage to seem less desirable than the smaller and much less expensive Chevy Spark? Here are five of our best reasons to consider buying a 2013 Chevy Spark as opposed to the allegedly more competent 2013 Kia Rio.

As we are not only obsessed with human backseat comfort around here but also with that of our canine friends, as soon as we arrived at the drive event for the 2013 Chevy Spark we were barraged with questions from a GM PR rep who told us that in a recent study they found 80% of Chevy owners brought their pets with them on most car trips. Then he inquired about how often Autobytel’s canine road tester Daisy Mae usually was riding along with us in the back seat to which we replied “100% of the time.” Dogs are like family for many people and as the 2013 Chevy Spark has four handy doors, it would prove to be a wise purchase for any pet owner.

Sadly, Daisy’s invitation for this drive got lost in the mail but she is quite interested in putting the Spark to the test for a full week so she can ensure that the interior dashboard trim and plastics would prove easy to clean after a trip down to the local dog beach. From our perspective, the optional leatherette upholstery that comes with 2LT models would be the wisest choice for dog owners simply because it would be easiest to clean. Chevy also offers it in a number of unique upholstery colors and styles that do help give the interior a true feeling of character.

Now this was the biggest head scratcher to us when comparing a Spark and Rio with automatic transmissions which obviously are going to be the volume sellers. You see, the Rio should feel like a muscle car compared to the Spark since its 1.6 liter 138 horsepower/123 lb. feet of torque 4-cylinder outmuscles the Spark’s 1.2 liter 89 horsepower/88 lb. feet of torque 4-cylinder by quite a hefty margin. But out on the road the Spark’s impressive mid-range urge and off-the line zip made it feel no slower than the 200 pound heavier Rio.

As for fuel economy, the Rio gets to the magic 40 mile per gallon EPA highway figure yet the Spark offers up “only” 38 miles per gallon highway. Smaller engines do have to work harder than larger ones which can be detrimental to freeway efficiency so this small gap should be expected even if the Spark impressed greatly with its smooth highway ride. So a Spark might not be the ideal car for a cross country road trip but then honestly neither is a Kia Rio.

Now, the 2013 Kia Rio can be had with more luxurious options than the Spark in its top of the line SX trim with goodies such as keyless start, heated front seats, a power sunroof, power folding side mirrors and full leather upholstery but do keep in mind that if you want all of that the price point can get close to $21,000. And really the only features unavailable with the Spark are power folding side mirrors, “real” cowhide on the seats (although it felt fake in the Kia), push button start and a sunroof. Those options are nice to have but are they really worth a price difference of nearly $4,000?

In perhaps a first ever for a car at this price point, every single 2013 Chevy Spark comes standard with alloy wheels instead of those easily broken plastic wheel covers which so often go flying down the street after the dealership mechanic breaks them during your first tire rotation. Thank you Chevy! The alloys used are 15-inchers as opposed to the 14-inch rims used in every other market where the car is sold. You see, in a surprising twist the United States is the last market to get the Spark as GM brass was concerned it couldn’t sell well here based on its small size. But as the Spark proves, sometimes size doesn’t matter.

There are three trim levels of Spark to choose from starting with the LT which has 10 airbags, air conditioning, power windows, an auxiliary input jack for the 4-speaker audio system, On-Star and the aforementioned alloys all for just $12,245 with the 5-speed manual gearbox. That’s definitely everything you need in personal transport but nowadays people do tend to like a little bit more. But it is nice to know that you can still buy a capable new car for the price of a used Hyundai Elantra.

While that is an appealing entry price, we think that the real value and feature winner here in the mid-level 1LT which adds Bluetooth, a USB port for your iPod, Sirius XM satellite radio, keyless entry, power door locks and mirrors as well as the hugely impressive Chevy MyLink system which connects to your smart phone and utilizes many of its features and apps via a large 7-inch center screen. Starting price for the 1LT is still only $13,745. MyLink can also play videos and movies on the center screen when the vehicle is parked and can connect to the BringGo app on your smartphone thereby giving owners an in-dash navigation system all for just the $50 cost of uploading it to your phone. You can’t find a better bargain on an in-dash navigator anywhere.

Now, the most expensive 2013 Chevy Spark is the 2LT model which will only barely cross the $17,000 threshold fully loaded with an automatic gearbox even with all fees and delivery costs included. Mind you, the price will only rise above $16,000 if you insist on ordering the optional premium black exterior paint job and engine block heater. Standard goodies on the 2LT (starting MSRP is $15,045) include heated leatherette seats, leatherette covered steering wheel, chrome interior accents, foglamps, unique machine faced 15-inch alloy wheels with grey pocket accents between the spokes as well as unique fascias and a rear spoiler enhancing the overall exterior style.

During a press drive in the Spark we first drove an automatic version which was impressive due to the fact that on LA’s kill or be killed local freeways there was still ample passing power even at 85 miles an hour. We were thankful for finding this out when a Dodge Ram pickup came up behind us on the aforementioned freeway at over 100 miles an hour and we were able to easily pass another car to get out of the way. But we didn’t really get lit up by the Spark (pun intended) until we tried the deliciously slick 5-speed manual gearbox which really makes this a car you might love rather than just one you would use for efficient commuting.

This self-shifter in the Spark is also nigh-on impossible to stall thanks to a forgiving clutch pedal and a light effort shifter so it would be a great entry point for a new driver wanting their first stick shift car. The Spark’s suspension also tenaciously held onto corners along the winding roads near Mulholland Drive much like your average puppy holds onto your favorite shoes during that pesky “chewing phase.” This trait now leads us to our next reason to buy a 2013 Chevy Spark.

So why was it so important to us that the Spark turned out to be an enjoyable car, fun even with the manual transmission, when we most likely should have been concerned with the fact that we somehow got lost and meandered off the official drive route laid out by Chevy? This was made all the more sad by the fact that both the pilot and co-pilot call Los Angeles home. Thank goodness for the inexpensive navigation system is all we will say.

Yet we found during our longer than intended drive that whether it was on freeways, city streets or twisting back roads, we drove the Spark to the very edge of its capabilities and somehow it managed to handle everything except steep uphill climbs with aplomb, albeit that was only a problem with automatic transmission equipped versions. We had fun driving the Spark thanks to steering that felt precise yet light enough to make good use of the tight turning radius and on twisty roads the well geared manual transmission got the best out of this eager yet hardworking engine.

During a week in a top of the line Kia Rio SX we experienced something along a Pacific Coast Highway drive route we always use which, we must admit, is not that challenging a road unless you count half naked beachgoers routinely jaywalking ahead of you a challenge.  But for the very first time ever on this stretch of road, we were overcome with a feeling in our gut that can only be described as seasickness. The Rio’s suspension pitched and rolled over undulations in the road that we had never noticed before while driving anything else. Really, isn’t it the passengers who are supposed to get car sick?

The Kia’s steering feel, which felt like it had inhaled all the numbing nitrous oxide in a dentist’s office, didn’t help matters as far as driving enjoyment went either. We actually had to pull off of the PCH in Laguna Beach and sat in a CVS parking lot drinking ginger ale for a half an hour just to feel better. After that experience, we tried a less challenging road in suburban Irvine, California which was very straight and very smooth and we noticed that the Rio did much better there. We then remembered that Kia’s North American Headquarters are in Irvine too. Come on Kia, maybe it’s time to start tuning your suspension on roads a little bit further from home. 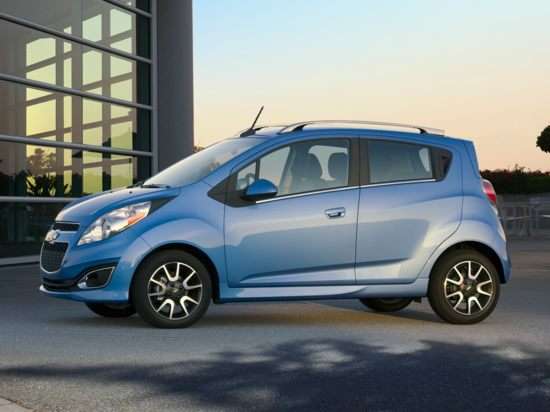 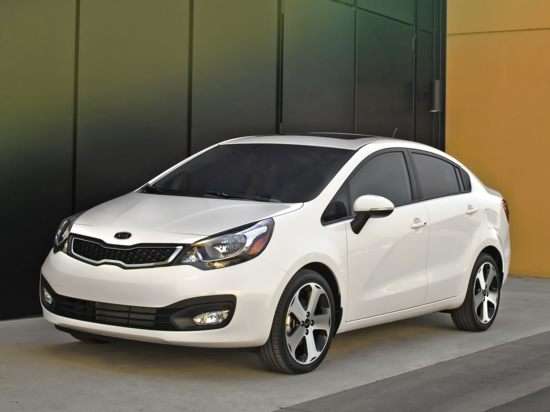