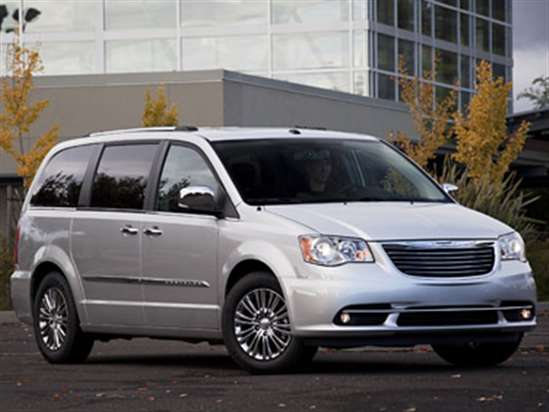 Changes for the 2013 Chrysler Town & Country:

The premium pick among the Chrysler Group’s minivans—the 2013 Chrysler Town & Country—solidifies that position by introducing leather seating in all models, along with a standard rear-seat DVD player that boasts a sharper-resolution screen than in the 2012 system. Upping the entertainment ante even higher, the 2013 Chrysler Town & Country also offers a full-on rear-seat media hub with the industry’s first Blu-Ray DVD player.

Also on the roster of refinements to the Touring L edition are perforated leather-trimmed seats (including power-adjustable passenger seats) and chromed exterior mirrors with integrated turn signals.

The much-acclaimed Pentastar V6 is the standard and only engine for the 2013 Chrysler Town & Country, with that unit capable of delivering 283 hp and 260 lb.-ft. of torque. Power is routed through a six-speed automatic transmission with a fuel-economizer driving mode and AutoStick manual-style shifting functionality.

A Top Safety Pick in testing by the Insurance Institute for Highway Safety (IIHS), the 2013 Chrysler Town & Country also is a 4-star overall performer in evaluations by the National Highway Traffic Safety Administration. Per NHTSA, the minivan achieved a 4-star score in testing for occupant protection in front- and rollover-crash scenarios, with a 5-star grade for side-crash protection.

Cabin versatility is a key selling point in the minivan segment, so it’s worth noting that the 2013 Chrysler Town & Country includes a nifty seating system that, in all models, allows the third row to face out for tailgating activities.

Among its more traditional tech benefits, the 2013 Chrysler Town & Country provides a variety of Uconnect systems, with features like a hands-free Uconnect phone setup and mobile wi-fi capabilities, and all the driver-assistance measures loaded into the SafetyTec package (e.g., blind-spot and rear cross-path warnings, as well as intelligent headlights that dim for approaching traffic).

People who viewed the Chrysler Town and Country also viewed: