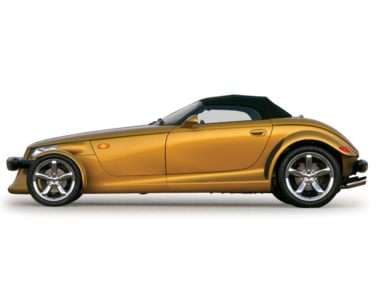 All About Chrysler Prowler

The Chrysler Prowler sports car began life as the Plymouth Prowler. It was at first a retro styled concept that Plymouth and Chrysler’s parent company, DaimlerChrysler, unveiled in 1993. In 1997, a revised version of the concept went into production. After a brief hiatus in 1998, the car resumed production from 1999 until 2002. Since DaimlerChrysler killed off the Plymouth brand in 2001, the Prowler was moved under the Chrysler name for its remaining years. The Prowler was the last Plymouth model to be sold in Canada. The Chrysler Prowler, a two-door roadster, featured extensive use of aluminum in its chassis and in other areas of its construction. The body of the Chrysler Prowler was produced in Ohio, and the car’s components were hand assembled at the Conner Avenue Assembly Plant in Detroit.

The introduction of the Plymouth Prowler and its continuation as the Chrysler Prowler touched off a retro revolution of sorts within DaimlerChrysler that then spread around the domestic auto industry. Chrysler engineers and designers were told they could design a new hod rod or sportster pretty much any way they liked, which resulted in some edgy design decisions, such as the Prowler’s race car-styled open front wheels. Chrysler followed up the Prowler with the PT Cruiser, a retro styled wagon, and another DaimlerChrysler brand, Dodge, resurrected its Challenger muscle car for the 2008 model year. Chevrolet introduced the SSR truck and HHR wagon, both flamboyantly retro styled, and reintroduced its Camaro sports car as a 2010 model. Ford brought back the Thunderbird for 2002 and added a touch of retro to the 2005 Mustang. Chrysler also built a concept vehicle called the Plymouth Howler, specifically for the Specialty Equipment Market Association show in Las Vegas in 1999. The show, which is better known as SEMA, is a way for auto manufacturers and aftermarket suppliers to collaborate, and they often show off new designs to get feedback. The Plymouth Howler was a hot rod-styled combination of a coupe and a truck, with a very small bed and a tonneau cover, that was based on the Plymouth Prowler. Instead of using the Prowler’s drivetrain, the Plymouth Howler concept was powered by a new Jeep drivetrain, a 4.7-liter PowerTech V8 paired to a five-speed manual transmission.

When the Prowler was introduced, it featured a high output 3.5-liter V6 engine that was paired to a four-speed automatic transmission, which yielded 214 horsepower. Though it was a Plymouth at first, the drivetrain was actually borrowed from the Chrysler lineup. In 1999, an aluminum block upgrade netted an additional 39 horsepower, for a total power output of 253. Chrysler borrowed a trick from other rear-wheel-drive sports cars and mounted the transmission near the rear of the car, connected to the engine by a flexible driveshaft. This helped the Prowler achieve excellent weight distribution for a relatively lightweight car, which offset some of the criticism Chrysler faced for using a V6 engine in the Prowler instead of a V8. The 1997 Plymouth Prowler had a top speed of 118 miles per hour and could achieve 0-62 miles per hour in 7.2 seconds. The upgraded 1999 Prowler, which stayed the same through its remaining three years, boasted a top speed of 126 miles per hour and a 0-62 acceleration of 5.9 seconds. The Prowler featured a staggered wheel setup: 7 x 17-inch front wheels and 10 x 20-inch rear wheels. The front wheels sat over 11-inch vented disc brakes; the rear wheels got 13-inch vented discs. The Prowler had another interesting feature, a custom trailer option that was available at Chrysler dealerships and resembled the back end of a Prowler. These trailers, intended to supplement the vehicle’s meager trunk space, cost $5000 and could be ordered to match the customer’s exterior color and wheels. The final Chrysler Prowler rolled off the production line in February of 2002.