When it comes to minivans, Chrysler wrote the book on it with the 1984 Dodge Caravan and Plymouth Voyager. And this sixth-generation Chrysler minivan, which now bears the Chrysler Pacifica name, is the latest expression of what a minivan should be. It is comfortable, versatile, and amazingly cost-effective. It offers an elevated seating position, but it doesn’t force you to get a stepstool to climb into the driver’s seat. It drives just like a front-drive car. And for this generation Chrysler has taken the bold step of adding a hybrid version, the first hybrid minivan in America. For 2019 model year, the multiple changes involve additional or changed content on various trims.

When car enthusiast writers want to put down a car, they say, “It drives like a minivan.” But the fact is today’s Chrysler Pacifica drives and handles very well, at least in the context of what its buyers want. Minivanners don’t seek to go auto-crossing or rip down canyon roads. What they want to do is move about their many day-to-day tasks as painlessly and pleasurably as possible. So that’s where Chrysler engineers concentrated their efforts.

Acceleration from the 287-horsepower Pentastar V6 engine is all you could want and more than most people will use. The nine-speed automatic transmission makes shifts a non-issue. Most importantly, the chassis delivers better handling than past Chrysler vans while also improving that devilish trio of noise, vibration, and harshness. With less body roll, the Pacifica also provides a more comfortable ride for rear-row passengers.

The interior of the Chrysler Pacifica mimics a luxury sedan's. The overall design is both functional and inviting with attractive soft-touch materials everywhere. The rich feature collection includes keyless entry, remote start, and heated and ventilated seats. When it introduced the Pacifica, Chrysler updated its much-touted but once difficult-to-use Stow 'n Go seating system.

Now, with the press of a button, the front seat moves forward to allow the second-row seat to be stowed into its floor tub. Once the seat is stowed, pressing the button again moves the front seat back to its starting position. Previously, this process required holding down the seat adjustment. In addition, the second-row seats now have a tilt feature allowing easy access to the third row even with a child seat installed in the second row. When things get messy, the optional Stow 'n Vac RIDGID-brand vacuum will help clean up.

Whether you’re hitting the road for a 500-mile vacation or just cruising the neighborhood to the next softball game, keeping the rear-seat troops occupied is of great value. To that end, the Chrysler Pacifica offers the Uconnect Theater entertainment system with two 10-inch seatback touchscreens. The driver is treated to a 7-inch full-color driver information display. The Uconnect 4 systems with either a 7-inch or 8.4-inch touchscreens complete the front-seat array.

Chrysler designers did a good job of making what is essentially a large shoebox into something that doesn’t look precisely like a large shoebox. Thankfully, they also passed on the inclination to try to make the minivan look like an SUV or a helicopter. The result is a pleasing one-box design with an abbreviated nose. The sliding door hardware is nicely integrated into the overall look. The tall and vertical rear window helps maximize cargo-carrying ability and increases rear headroom.

The Pacifica offers what FCA claims are “segment-first” hands-free sliding doors. Similarly, the expansive liftgate opens with the kick of a foot, but you don’t actually have to kick the liftgate to get it to open. Waving your foot underneath the bumper area will do the trick. The optional three-panel panoramic sunroof adds light and airiness.

Powering most Pacificas is the venerable Pentastar V6 gasoline engine — updated for use in the Pacifica — mated to a nine-speed automatic transmission. The engine delivers 287 horsepower and 262 pound-feet of torque. Upgrades include two-step variable-valve lift, cooled exhaust-gas recirculation, and weight reduction. While many automatic stop-start technologies seem more irritating than they are worth, the Pacifica’s system is benign and unobtrusive.

A plug-in hybrid powertrain is also available. The system uses two electric motors, both capable of driving the vehicle’s wheels, in combination with a 16-kWh lithium-ion battery pack. Another key ingredient is the eFlite single-electrically variable transmission. The minivan’s all-electric range is 33 miles. Total electric and gasoline range is 566 miles, and the hybrid gets an 84 MPGe rating.

Total passenger interior volume plus the cargo area behind the third row is a whopping 197.3 cubic feet. That's not enough to hangar the Goodyear blimp, but close. You don’t typically picture a front-wheel drive vehicle like the Pacifica as a tow vehicle, but it's rated to haul up to 3,600 pounds.

Minivans transport families, and family safety is paramount. So the Chrysler Pacifica has an impressive array of safety and security technology. Leading the list is the optional emergency automatic braking system that alerts the driver about a possible collision and slows or stops the van if an impact appears imminent. A lane-keeping system detects possible run-off-the-road mishaps and delivers input via the steering wheel to alert and assist with corrective actions if necessary.

Adaptive cruise control maintains the distance between the Pacifica and the vehicle in front of it in a variety of traffic conditions. These safety features and others are accompanied by an optional 360-degree surround-view camera and a park-assist system. The Pacifica has five seating positions that will accept LATCH child-safety-seat installation.

The L is the price-leader with steel wheels and a second-row bench seat that lacks the Stow ’n Go feature. The levels bring additional equipment, and the top-level Limited is the most elaborately equipped. Niceties like hands-free sliding doors and hands-free liftgate plus multi-zone automatic climate control are standard on the Limited model. The hybrid trims mimic the equipment levels in their non-hybrid counterparts, just with fewer trims to choose from.

In terms of safety, the Pacifica received an overall five-star rating from the National Highway Traffic Safety Administration, its highest score. Among family vehicles, it is a superstar. 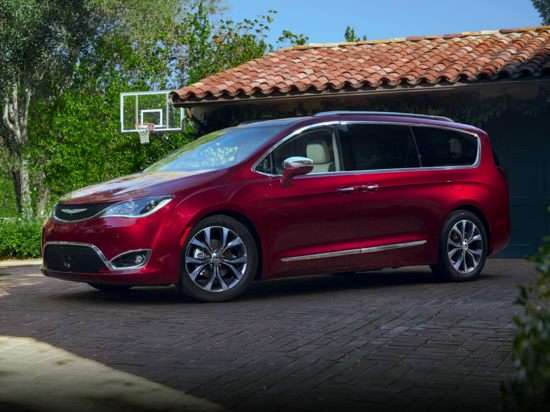