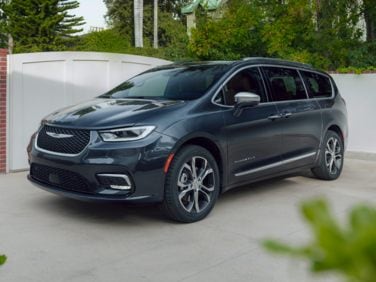 All About Chrysler Pacifica

The Chrysler Pacifica is a four-door mid-size crossover that seats up to six passengers. The Chrysler Pacifica was manufactured in Windsor, Ontario, Canada from 2004 through 2008. When Chrysler merged with Daimler in 1998, a number of shared platform vehicles began to appear in North American showrooms. While some of these, such as the 300, were extremely well received, the collaboration also bore some excellent products which never seemed to find the market they were looking for. One of these vehicles was the Chrysler Pacifica, which was brought out in 2004 as a mid-size crossover.

The influence of Chrysler’s successful minivan program can easily be seen in the Pacifica’s exterior styling. In fact, the vehicle closely resembles the Town and Country, especially from a front or three-quarter view. Much of this can be attributed to the grille, the rising hood and the large greenhouse. Conspicuously absent, however, are the sliding doors, as the Pacifica is a true four-door vehicle. Seating capacity is also restricted to six, further separating it from its minivan brethren.

The crossover can be ordered in LX, Touring or Limited trim. The base front-wheel drive LX comes with Chrysler’s familiar 3.8 liter V6 which dates back to the early 90’s. In the Pacifica, it makes 200 horsepower and 235 lb-ft of torque, and it is paired with a 4-speed automatic transmission. Stepping up to the Touring or any all-wheel drive model, (an option across each trim level), replaces the 3.8 with a 4.0 V6 generating 253 horsepower and 262 lb-ft of torque. A more modern 6-speed automatic handles the shifting for that unit.

Both the LX and the Touring come with 17 inch wheels, but the Limited up-sizes these to 19-inches, which better fill the Pacifica’s high wheel wells. The LX makes do with cloth seats, compared to the leather options in the higher trim levels, and it also has a simpler stereo and entertainment system. Touring models are outfitted with a few more driver and passenger amenities such as heated outside mirrors, 10-way power driver’s seat, automatic dual-zone temperature control, and an overheard console. The Limited provides the maximum amount of bells and whistles, particularly with the selection of the Signature Series option package.

Strangely, the base Pacifica is only available as a five-seater, while the Touring and Limited models can be configured to seat six. Regardless of the seating arrangements, the inside of the Pacifica feels large and roomy, with plenty of space for all passengers to feel comfortable even on long trips. Cargo capacity is somewhat limited for a vehicle of this size when third-row seating is selected, but without it it does provide a good amount of volume for hauling luggage, groceries or sports equipment.

When it comes to driving experience, the Pacifica makes it clear that while it may resemble a minivan, it bears none of the same performance stigma which keeps so many at arm’s length. While the crossover is not a sports-oriented machine, it provides a ride which is smooth and controlled even in inclement weather, thanks to the standard electronic stability control. The vehicle never feels like it is working too hard and highway cruising is effortless, especially with the 4.0 V6.

Sadly, it appears as though buyers have been unable to see beyond the minivan-esque exterior appearance of the Pacifica, and despite the vehicle’s comfort and utility, sales have been sluggish enough that Chrysler has decided to make 2008 the final year of production.