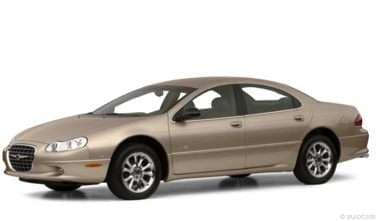 All About Chrysler LHS

The Chrysler LHS is a 4-door sedan that originally debuted for the 1994 model year. The vehicle served as the predecessor to the Chrysler Imperial and Chrysler New Yorker and acted as Chrysler's largest, most luxurious passenger car. The vehicle was manufactured through the 2001 model year (though production was skipped for the 1998 model year). Listed as a full-size sedan, the car competed directly with such vehicles as the Pontiac Bonneville, Toyota Avalon and Oldsmobile Eighty Eight.

The Chrysler LHS was a more luxurious version of the Chrysler Concorde. Dimensions, exterior styling and construction were virtually identical, with the LHS only differing in terms of a slightly longer nose and available equipment. Both vehicles were also similar to the Eagle Vision and Chrysler 300M, which were also built on the Chrysler LH platform. Overall dimensions for the Chrysler LHS include a length of 207.7 inches, width of 74.4 inches and height of 56.0 inches.

The LHS went through two generations of body design. The 2nd generation debuted for the 1999 model year. A steeper window curve reduced cabin space, with front and rear headroom coming in at 38.3 inches and 37.2 inches, respectively. The vehicle accommodated up to five passengers and featured a cargo volume of 16.8 cubic feet.

The Chrysler LHS was only available with one engine option – a 3.5-liter V6 that delivered 250 horsepower and 255 lb-ft. of torque. Paired with a 4-speed automatic transmission, the LHS provided EPA-estimated fuel efficiency of 18 mpg in the city and 27 mpg on the highway. Traction control was also available for the sedan.

Standard safety features for the Chrysler LHS included dual front airbags, 4-wheel antilock disc brakes and an emergency inside trunk release. Front side airbags were available as an optional upgrade. In government crash tests performed by the NHTSA, the LHS earned 4 out of 5 stars in the categories of passenger front impact and driver side impact. A 3-star rating was awarded for the categories of driver front impact and rear passenger side impact.

The Chrysler LHS may serve as an affordable luxury vehicle for those shopping for a used vehicle. During production, many experts noted that the vehicle offered similar amenities as more expensive European options. Known trouble spots to look for when buying a used Chrysler LHS include faulty interior lights, reduced range of keyless entry, steering noise, sluggish steering and excessive vehicle noise.