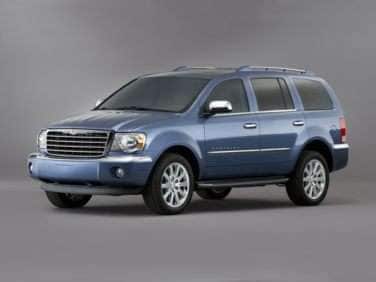 All About Chrysler Aspen

The Chrysler Aspen is a four-door full-size sport-utility vehicle that seats up to eight passengers. The Chrysler Aspen is manufactured in Newark, Del. alongside the Dodge Durango. While companies such as Chevrolet and Ford have had full-size, extended length SUVs on the market for many years, Chrysler was late to the game. Dodge had the Durango mid-size SUV, but Chrysler remained conspicuously absent until 2007, when the decision was made to re-brand the Durango and take it in an upscale direction. Christened the Aspen and riding on the newly enlarged Durango platform, it was the first SUV of any kind to be offered with a Chrysler badge.

The Chrysler Aspen has a distinctive look when compared to its Dodge sibling. While both share the same boxed frame as the Dodge Ram pickup truck, the Aspen’s front end has a less bulky appearance than the Durango, and this streamlined effect continues along the roofline and sides of the vehicle. The standard engine is a 4.7 liter V-8 engine making 303 horsepower and 330 lb-ft of torque, which is distributed to the rear wheels through a 5-speed automatic transmission. Four-wheel drive is also an option. This motor helps to give the Aspen an excellent 8,950 lb towing capacity, which rivals that of the Suburban and the Expedition. Chrysler also offers its 5.7 liter, 340 horsepower Hemi V-8 as an option

There are two versions of the Aspen available, the Limited and the Signature Series. The Aspen is nicely equipped even in the entry level Limited trim, since Chrysler has positioned the vehicle as a more luxurious version of its Dodge sibling. The Limited comes with cloth seats, power everything, rear seat air conditioning and 18-inch wheels, along with a host of other convenience and appearance features. The Signature Series version of the Aspen clicks off every option box available on the order form, with some of the highlights being the Chrysler MyGIG multimedia system, a sunroof, heated leather seats, a power lift gate and a backup camera. The Limited also comes with backup assistance - however the system uses sonar instead of a video system.

In terms of interior space, the Aspen can handle up to 8 passengers, making it a very capable people mover. While second row seating may be a bit more cramped than some of its domestic and Japanese competitors, folding the third row seat provides an excellent 68 cubic feet of trunk space – more than enough for a stack of hockey bags or camping equipment for a weekend getaway. Access for both passengers and cargo loading is made easy by large doors which swing open almost 90 degrees.

While the Hemi engine provides the greatest acceleration, particularly when the vehicle is loaded up, the fact that the engine uses a management system which can shut down up to 4 cylinders while cruising at a consistent speed gives the Aspen decent fuel economy as well. 19 miles per gallon is standard for SUVs of this size on the highway, with numbers dipping to 14 miles per gallon in the city. A hybrid version of the Aspen is slated to come out in the fall of 2008 as a 2009 model, and its 400 horsepower gasoline / electric powertrain offers a much improved 19 miles per gallon in the city.

The Chrysler Aspen makes an excellent choice for buyers who are turned off by the rugged styling of the Durango, and also for those who desire more standard equipment and more of a focus on passenger comfort.

The 2009 Chrysler Aspen is a carryover from 2008, with the exception of a new hybrid model. The 2009 Aspen comes in two trim levels, the Limited and the Hybrid. The Limited trim is powered by a 4.7 liter V8 engine as standard equipment that provides 303 horsepower and 330 lb-ft of torque. Fuel economy for this unit is rated at 14 miles per gallon in the city and 19 miles per gallon on the highway. A 5.7 liter Hemi V8 is available as an option for this trim level, and it offers 376 horsepower and cylinder deactivation technology in order to keep fuel economy at 14 miles per gallon in city driving and 20 miles per gallon on the highway. Both of these engines use a 5-speed automatic transmission to hand the gear shifting duties. Four-wheel drive is available as an option.

The Hybrid edition of the 2009 Chrysler Aspen makes use of a special two-mode version of the 5.7 liter Hemi V8. This powertrain makes use of cylinder deactivation technology combined with a 40 horsepower electric motor powered by a battery. This increases the vehicle’s fuel economy by almost 40%, with city driving rated at 20 miles per gallon and highway cruising coming in at 22 miles per gallon. Combined horsepower of the gasoline / electric system is 399 ponies, and a continuously-variable automatic transmission sends this power to all four wheels.