That thing got a hybrid in it?

2009 Chrysler Aspen Hybrid Preview – 2007 Los Angeles Auto Show: Except for some mild tweaks to improve windflow, this is just a hybridized version of the Aspen you’ve already met. The Auburn Hills manufacturer is utilizing the two-mode hybrid system developed in partnership with General Motors, Mercedes-Benz and BMW, and finally getting into the hybrid game. Following in the footsteps of GM’s Chevrolet Tahoe and GMC Yukon hybrids, the Pentastar automaker chose to introduce the new hybrid system in its large SUV as well as in its Dodge stable mate the Durango. So what we’re really previewing here is the hybrid system and what they mean to large suvs.

The projected 25 percent fuel economy increase is great for any car, but it’s even more significant in a vehicle that only averages 12 mpg. The savings should make a larger difference in the wallet of SUV owners than in the wallets of more ecologically minded hybrid buyers. Better mileage ratings are crucial to Chrysler’s well being as stricter mileage standards are enforced by the EPA. A successful hybrid system could mean the difference between remaining viable while other platforms are developed or Cerberus having to scrap America’s third largest automaker before they really get the opportunity to turn it around.

Yep, that thing’s got a Hemi in it. The 5.7-liter Hemi V-8 comes standard with Chrysler’s Multi-Displacement System (MDS) allowing the engine to operate on fewer cylinders when they aren’t needed, improving fuel economy. As a two-mode hybrid, the Aspen can run solely on electric power at lower speeds and also use electric assist while operating at higher speeds, allowing it to benefit from its electric motors in both cases. Speed control is managed through an Electric Continuously Variable Transmission (ECVT) which uses two electric motors to vary speed.

You’ll have to look hard to spot the differences between the standard Aspen and the 2009 Chrysler Aspen Hemi Hybrid. Slight variations to improve wind and rolling resistance are present according to Chrysler, but we had a hard time spotting them. That’s a good thing, because the whole point of the two-mode hybrid is that you don’t have to give up performance for better economy.

People are always going to need large vehicles to haul, tow and taxi people and cargo around. To ignore the large SUV segment when discussing improving fuel economy and in turn the environment is an oversight that has been long overlooked. We like that this segment is finally being given its due, because like them or not, the large SUV is not going away, and anything we can do to make them more efficient paves the way to a more sustainable future. 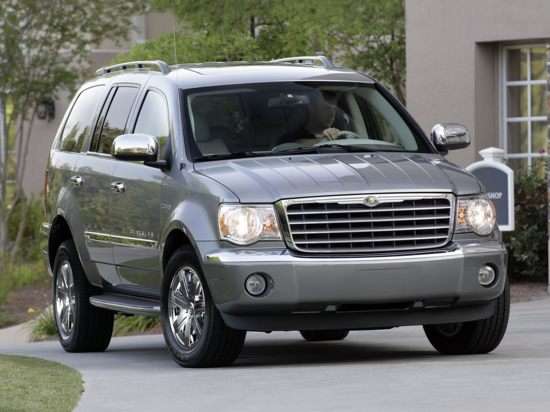