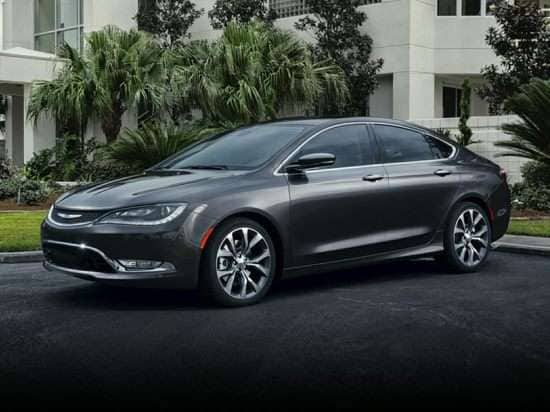 Chrysler redesigns the midsize 200 Sedan this year, setting the stage for next-generation versions of the 300 Sedan and the Town & Country minivan, as well as an expansion of the lineup that will include a new compact Chrysler 100 and a crossover SUV. Buyers choose between a 4-cylinder and a V-6 engine, and front-wheel or all-wheel drive. Numerous convenience, infotainment, and safety technologies are available for the new 2015 Chrysler 200.

Select the 200 Limited for LED running lights, aluminum wheels, a touchscreen infotainment system with Bluetooth, and other enhancements. The 200S adds a sportier look plus bigger wheels, a stiffer suspension, shift paddles, sport seats, a power driver’s seat, satellite radio, and more. Get the 200C for leather, heated front seats, automatic climate control, and other upgrades.

Choose the 200S or 200C, and you can upgrade to a more robust 295-horsepower, 3.6-liter V-6 engine. An all-wheel-drive system is available with the V-6 engine, and when not in use it disconnects from the drivetrain in order to conserve fuel.

The 2015 Chrysler 200 Sedan’s standard 4-cylinder engine is rated to get 28 mpg in combined driving, while the V-6 engine returns 23 mpg. Install the optional AWD system, and the 200 earns a combined-driving rating of 22 mpg.

As this summary is written, the 2015 Chrysler 200 Sedan has not been crash-tested by the NHTSA or by the Insurance Institute for Highway Safety (IIHS).

Unlike most cars, the Chrysler 200 Sedan’s transmission is equipped with a rotary knob that the driver twists in order to choose a gear. Bluetooth connectivity is standard for all models except the base 200 LX, while the 200C gets a humidity-sending dual-zone climate control system and a reversing camera.

Additional upgrades available for the new Chrysler 200 Sedan include a 9-1-1 Call system that automatically contacts emergency services personnel if the car’s airbags deploy, thereby speeding rescuers to the scene of the accident. The 200 Sedan is also available with Blind Spot Monitoring, Lane Departure Warning, Lane Keep Assist, and a Forward Collision Warning system with Active Braking.