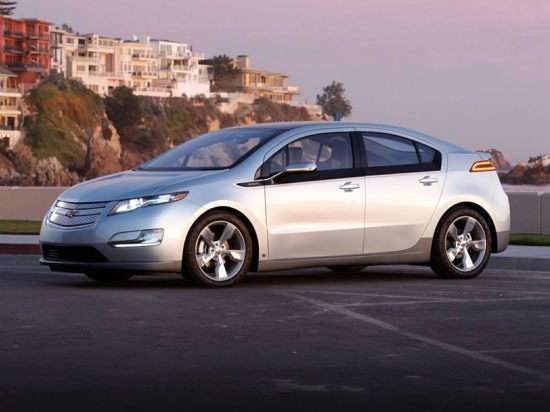 Changes for the 2015 Chevrolet Volt:

Chevrolet sells the 2015 Volt in a single level of specification, one that can be upgraded with prettier paint, fancier wheels, leather seats, a navigation system, and a premium sound system. Buyers can also add a reversing camera, front and rear parking assist sensors, a lane departure warning system, and a forward collision warning system.

What’s that? You want a blind spot warning system? No luck, Chuck.

By the way, this is a 4-passenger, 5-door hatchback with a trunk measuring 10.6 cu.-ft. You can fold the rear seats to expand cargo room.

The entire point of the Chevrolet Volt is its unique drivetrain, and it takes some explaining, so bear with us.

Wait! Put that disappointment on hold. What makes the Volt exceptionally useful and practical is that it also has a 1.4-liter gasoline engine. This engine operates as a generator, its power output converted to electricity and fed to the Volt’s electric motor. Under rare circumstances the gasoline engine might directly power the Volt’s wheels, but most owners would never experience such conditions.

The result of this design is that a Volt operates purely on electricity for the average daily driver who commutes to work, plugs in during the day, commutes home, and then plugs in at home. Let’s say, though, that on a Friday afternoon the gang at the office decides to head to Vegas for the weekend. Guess what? You can drive your Volt, and you don’t need to worry about recharging it because of that gasoline engine. Whoo-hoo!

The EPA gives the Volt an efficiency rating of 98 MPGe. If you run the car solely using the gasoline engine, expect to get 37 mpg in combined driving. Total combined driving range is 380 miles, and according to Chevrolet, Volt owners travel an average of 970 miles between visits to the gas station.

A Volt is practical, efficient, and safe. It gets a 5-star overall crash-protection rating from the NHTSA, and the Insurance Institute for Highway Safety (IIHS) calls it a “Top Safety Pick.”

Aside from the impressive drivetrain, the 2015 Volt is now available with OnStar 4G LTE connectivity, which turns the car into a mobile Wi-Fi hotspot. Service is free for the first three months or 3GB of data usage; after that, a subscription is required.

A Chevrolet MyLink infotainment system is also standard for the Volt, integrating with the owner’s smartphone and offering Text Messaging Alerts, Siri Eyes Free capability, and more. Owners can also manage vehicle charging from their smartphones, and every Volt is equipped with six months of free Automatic Crash Response service through OnStar.