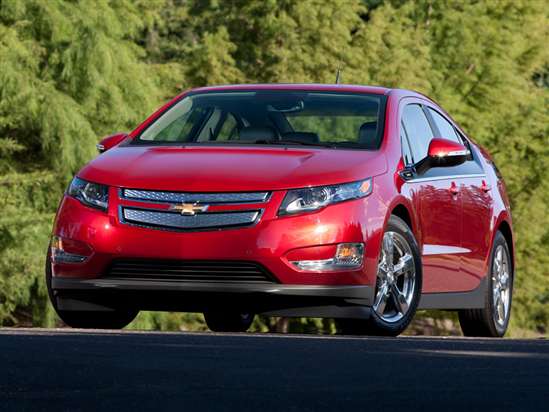 Changes for the 2014 Chevrolet Volt:

Chevrolet chops $5,000 off the 2014 Volt’s price tag, bringing the car in at $34,995 before federal and state tax credits are applied, but including the destination charge. A leather-wrapped steering wheel is standard this year, and new colors include Ashen Gray Metallic and Brownstone Metallic.

The 2014 Chevrolet Volt is equipped one way, with a short list of option packages and equipment. A Premium Trim Package adds leather upholstery and heated front seats, an Enhanced Safety Package 1 includes a reversing camera and rear parking assist sensors, and an Enhanced Safety Package 2 equips the Volt with front parking sensors, a Forward Collision Warning system, and a Lane Departure Warning system. Additional options include premium paint, upgraded wheels, a navigation system, a premium sound system, and a handful of dealer-installed items.

The 2014 Chevy Volt is an electric car with a small gasoline engine that serves as a generator when the battery pack is depleted of energy. Only in rare circumstances, such as when driving up the side of a mountain with a full load of passengers and cargo, will energy from the gasoline engine directly power the car’s wheels.

Here’s how it works. A rechargeable lithium-ion battery pack and an electric motor power the Volt’s front wheels for the first 38 miles of travel, depending on how you drive, terrain, and other variables. When the battery reaches a minimum state of charge, a 1.4-liter 4-cylinder engine fires up, burning gasoline and serving as an electrical generator to feed the battery and electric motor energy until the Volt can be plugged in and recharged, or until the Volt visits a gas station.

Using a standard 120-volt power source, the Volt’s battery can be topped off in 16 hours or less. Opt for a 240-volt home charging station, and recharging time is cut to 4 hours. If the Volt can’t be recharged, don’t worry. You could drive one from New York to Los Angeles using nothing but the onboard gasoline generator engine, if you needed to.

Using the gasoline generator engine, the Volt is rated to get 37 mpg in combined driving. Fully charge the battery for a total range of 380 miles, and the Volt delivers 98 MPGe, or miles-per-gallon-equivalent.

In testing conducted by the National Highway Traffic Safety Administration (NHTSA), the 2014 Volt earns a 5-star overall crash-test rating. The Insurance Institute for Highway Safety (IIHS) has not rated the 2014 Volt as this summary is written, but last year the virtually identical model was named a “Top Safety Pick.” Note, however, that the IIHS had not subjected the Volt to it’s tough new small overlap frontal-impact test.

In addition to its unique powertrain, the 2014 Volt is equipped with a standard OnStar telematics system that includes three free years of service, including Automatic Crash Response and an OnStar RemoteLink App. A Chevrolet MyLink touchscreen infotainment system is also standard.