Electric car, hybrid, plug-in hybrid—whatever you choose to call the Chevrolet Volt, the car created quite a stir when it was introduced back in 2010 (as a 2011 model).

Without question, the most remarkable thing about driving the Chevrolet Volt is how unremarkable the driving experience is. Sure, a dramatic fanfare emits from the Chevrolet’s audio system every time you press the blue power button, and yes the instrument panel looks like a cross between a video game and somebody’s idea of a futuristic concept car’s readouts. But rolling down the street, the Volt feels like you’re just driving a car.

Chevrolet offers the 2013 Volt in but one relatively well equipped state of trim; however there are four option packages available to enhance the feature content of the car.

Among the key features of the standard equipment list of every 2013 Chevrolet Volt are a six-speaker audio system fed by Chevrolet’s MyLink head end system incorporating Bluetooth streaming audio for music and telephony; a voice recognition interface for telephone, onboard music, and radio; Pandora and Stitchery smartphone compatibility; Gracenote (Play list+, Album Art); updatable software for the radio and the Gracenote database, an aux audio input jack, and a USB port. A three-month trial of Sirius XM Satellite Radio is included as well.

To accomplish comfort and convenience upgrades for the Volt, Chevrolet offers the Comfort Package and the Premium Package. A set of heated front seats and a leather-wrapped steering wheel comes with the Comfort Package. Building upon that, the Premium Package adds leather upholstery for the seats—as well as a removable rear seat center armrest, which is new for the 2013 model year.

Audiophiles can get a seven-speaker Bose sound system separately. The Bose system can be ordered with a navigation system featuring real-time traffic info, voice controls, and a 30GB hard drive for digital music storage.

In the rather recent past, GM and Toyota shared a factory in Fremont, Calif. The goal was for the two manufacturers to learn from one another. And while this particular lesson was learned elsewhere, one thing GM learned from Toyota nevertheless is if you are trying to build an iconic car, you’d do well to make it look like nothing else on the road. Thus, the moment you see a Prius, your brain goes “hybrid”—because nothing else looks like a Prius.

Similarly, nothing else looks like a Volt. When you see one, right away you know there’s something different about the car. Additionally, while the Volt’s shape distinguishes the Chevy from everything else out there, it also serves a functional purpose.

According to Chevrolet’s press materials; the Volt’s rounded and flush front fascia, tapered corners and grille enable air to move easily around the car to reduce drag. In the rear, sharp edges and a carefully designed spoiler are situated to control air flow. The purpose of the aggressive rake on the windshield and back glass is to also help reduce turbulence and drag. With all of these touches, Volt is claimed to be the most aerodynamic vehicle in Chevrolet’s history.

And yes, this includes Corvette.

Overall, the ambiance of the Volt’s passenger compartment is quite pleasant; Chevrolet’s interior designers have come up with some attractive two-tone color schemes to keep the environment visually interesting. Sadly though, all the love is lavished on the front half of the passenger compartment, the back seats are surrounded primarily by black plastic. The two-tone treatment doesn’t go all the way back there.

Speaking of the back seats, they fold to increase cargo capacity and the Volt’s hatchback makes loading larger items easy to accomplish. A detachable privacy screen conceals objects when the seats are in the upright position. It’s a good thing those seats fold too, cargo capacity with them in place is only 10.6 cubic feet.

Back to that video game instrument panel we discussed earlier; it’s nice and colorful and certainly represents a significant achievement technologically. However, in our opinion, it’s a bit overwrought. There’s so much going on there, you have to study it for a bit to absorb everything it’s trying to tell you. Over time, if you buy a Volt, we’re sure it’ll become second nature—but at first glance it’s a definite WTF moment.

Similarly, we admire the engineering that went into the touch-sensitive control panel occupying the center stack. We just the execution of the interface has been accomplished differently. Things are kind of hard to find on it. With no distinct tactile position for each function, you have to read the word for the accessory you’re trying to activate. At night, for older eyes, that is a bit of a challenge. Again though, over time, if you own the car, we’re sure you’ll come to know what to touch.

Over the course of one sunny Northern California winter day, we drove the Volt through city streets, on freeways, and among the winding twists and turns of the hills of western Marin county with absolutely no concern about refueling. Long story short, with the Chevrolet Volt’s innovative powertrain strategy, range anxiety is a concept whose time has passed.

We went into it a bit earlier, so we’ll keep the description short here. Basically, the Volt is an electric car using a 1.4-liter gasoline engine as a generator to provide electricity, once the battery pack is depleted. The gasoline engine generates juice to drive the electric motor in much the same way as a diesel locomotive’s engine produces electricity to power the electric motors that actually move the train.

GM claims a range of 38 miles for the battery pack alone and an overall range of 382 miles using both the engine and the battery pack. The EPA rates the Volt at 98 miles per gallon equivalent overall. We drove 110 miles that day. Traveling 31 of them on electricity and 79 on gasoline, we burned just over two gallons of gas total. At the average rate of $4.00 for a gallon of regular here in northern California, that means we drove 110 miles for approximately $8.00, and got just under 55 miles per gallon.

Now, even if we were babying the Volt, trying to squeeze every mile per gallon out of it by accelerating gently away from traffic signals and driving at mild cruising speeds on the highway—in other words, doing everything we could to maximize efficiency—that would be an impressive number.

But that’s not what we did.

We accelerated onto the freeways with exuberance, unhesitatingly claiming our God-given position in the far left lane, easily keeping up with the flow of traffic. On the winding country lanes, we maintained the most brisk pace the Volt would allow, and we ran it in the sport mode. We passed slower drivers, used low range to simulate engine braking going into turns, and accelerated briskly off of turns. With maximum torque available right off the bat, passing poses no challenge to the Chevrolet at all.

Additionally, we ran the climate control system at 72 degrees on a 50-degree day, used the seat heaters in the morning, paired our phone to the Bluetooth system—used it liberally, and enjoyed the Bose audio system all day long. For the first half of the day we had one passenger in the car, for the second half of the day the Volt transported three souls.

By the way, in the twisty sections of the drive, the Volt proved itself to be more than a willing partner at driving quickly. It turns In nicely, displays adequate grip and rockets off the apex with a great deal of verve. If you push It too hard, the low rolling resistance tires will howl a bit as the front wheel drive Volt pushes, but keep It In Its site spot and you'll have a lot of fun driving a Volt.

In other words, In addition to its economical attributes, the Chevrolet Volt is actually fun to drive too. Now don’t misunderstand, the Volt isn’t a terra-scorching sports sedan. The Chevrolet’s overly aggressive traction control proves that right away. But dynamically, it’s no snooze-mobile either.

We did all of that and still came home averaging 55 miles per gallon overall. That, in our opinion ladies and gentlemen, is nothing short of phenomenal. Driven more conservatively, we’re certain the Volt could do at least 20 percent better over the same variety of roads.

Anti-lock brakes with traction control, GM’s StabiliTrak electronic stability control, and LED daytime running lamps lead the array of safety kit fitted to the 2013 Chevrolet Volt. Because it runs so quietly in electric mode, the Volt also has a driver-activated feature for sounding a noise to alert pedestrians. In the event of a crash in which an airbag is deployed, the Volt will use OnStar to alert emergency personnel.

NHTSA’s testing determined the Volt worthy of a five star rating in frontal and side impact crashes. The IIHS pronounced the Chevrolet “good” (it’s highest rating) in frontal offset, side impact, and roof strength testing.

As innovative as it is, all in all, the Volt is a perfectly normal car, albeit one returning much better than average fuel economy—thanks to its groundbreaking powertrain solution. Speaking of that powertrain solution, let's revisit range anxiety—but from a different angle for a minute.

Admittedly new technology, it might be a cause of concern for some people. General Motors has enough confidence to warrant it for eight years or 100,000 miles. With that said, you can be pretty sure it will go at least that long trouble free. Further, Volts have been around for going on three years now and battery failures are pretty much non-existent.

Exceptionally quiet, with a comfortable ride and nicely equipped, the 2013 Chevrolet Volt is indeed a better way to get from Atlanta to Boston. Whether you choose to call the Volt a hybrid, an extended range electric, or a scaled-down locomotive, we’re here to tell you, the Volt isn’t hype.

• Kind of pricey for the segment it competes in

• Could use a bit more power equipment for the price 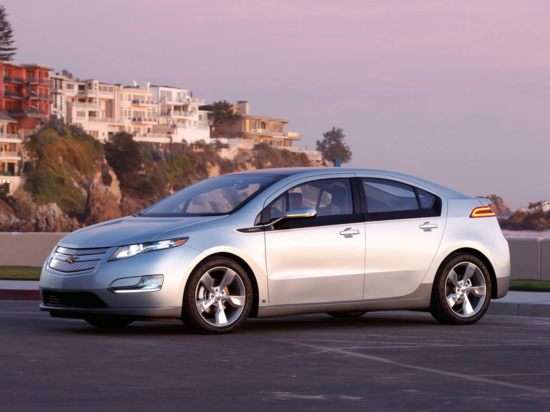