New face on an old favorite

CHICAGO, IL - After nearly two decades of middling attempts to market a viable minivan - Chevrolet Astro in 1985, Chevrolet Lumina APV in 1990, Chevrolet Venture in 1997 - Chevrolet is moving to exploit a new niche that it calls the Crossover Sport Van (CSV). What is a CSV? As evidenced by the 2005 Chevrolet Uplander (and the Mazda MPV All-Sport in the 1990s), a CSV is a minivan with a big nose, available all-wheel-drive, a rugged outdoorsy nameplate, and reduced passenger and cargo capacities. In other words, the Uplander lands somewhere in the thin gray area between a Chrysler Pacifica and a Chrysler Town & Country.

Chevrolet's new Uplander is the old Venture minivan equipped with new SUV styling cues that are expected to erase the mommy-mobile stigma that most minivans suffer. But don't let us lead you to believe that this so-called CSV amounts to little more than a nose job. Chevrolet has substantially upgraded its eight-year-old minivan platform in an attempt to give it a new lease on life until a completely redesigned people-hauler arrives near the end of this decade.

For example, the old Chevrolet Venture did not post admirable offset crash test scores. So engineers added a longer nose to the 2005 Chevrolet Uplander to produce additional crush space, added reinforced side rails inside the engine compartment, strengthened the A-pillars, and gave all seating positions three-point shoulder belts and load-limiting retractors with pretensioners. Front dual-stage airbags with passenger sensing have been added and side impact airbags are optional. Additionally, a new braking system provides increased stopping performance to help the Uplander's driver avoid an accident in the first place, and GM's Versatrak all-wheel-drive system will be more widely available than before. Furthermore, StabiliTrak stability control is also available, though not in conjunction with Versatrak. Significant upgrades to be sure, but we should note that side curtain airbags are not offered despite the fact that increasing numbers of competitors are including them, complete with rollover accident protection.Inside, the 2005 Chevrolet Uplander gets a new two-tone dashboard with silver trim splitting the dash and covering the steering wheel spokes, bright trim rings around the gauges, and fake wood on the center stack and door panels. Revised rear seating allows the Uplander to carry seven adults, but six are more comfortable. The third-row split-folds flat and the second-row captain's chairs do too. Or both rear rows of seats and the handy cargo storage box can be removed from the vehicle for maximum utility and cargo space. Folding trays equipped with cupholders are located between the front and second-row seats, and an overhead rail system features storage cubbies and an available DVD entertainment unit. Options on the 2005 Chevrolet Uplander include a navigation radio, XM satellite radio and triple-zone climate control.

Power comes from the same engine that propels the Chevrolet Malibu, a new 3.5-liter V6 engine making 200 horsepower and 220 pound-feet of torque. A four-speed automatic transmission transfers power to the front wheels or all four when equipped with Versatrak AWD. Versatrak senses front wheel slippage and transfers power from front to rear or side-to-side as necessary. The 2005 Chevrolet Uplander tows 3,500 pounds and ground clearance measures 6.5 inches.Despite upgrades and a new name, Chevy's minivan…oh, excuse us, crossover sport van…entry does not move to the head of the class. Innovation of the sort demonstrated by Dodge with the 2005 Grand Caravan, Nissan with the 2004 Quest, and Toyota with the 2004 Sienna is required to considered the teacher's pet. Rather, the 2005 Chevrolet Uplander is hanging out in the back of the classroom with the Ford Freestar, Kia Sedona, Mercury Monterey and the other GM CSVs, lobbing spitballs at the blackboard over the heads of the Honda Odyssey and Mazda MPV. General Motors should ready the rebates right out of the chute. 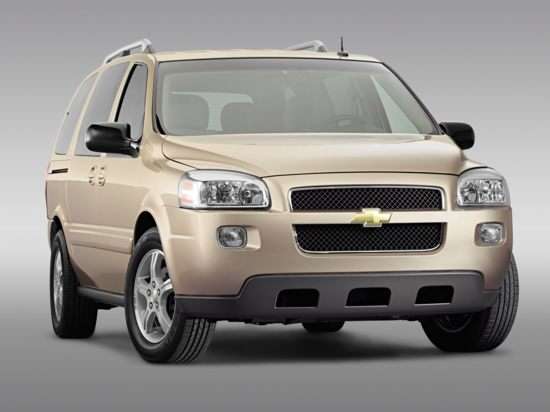